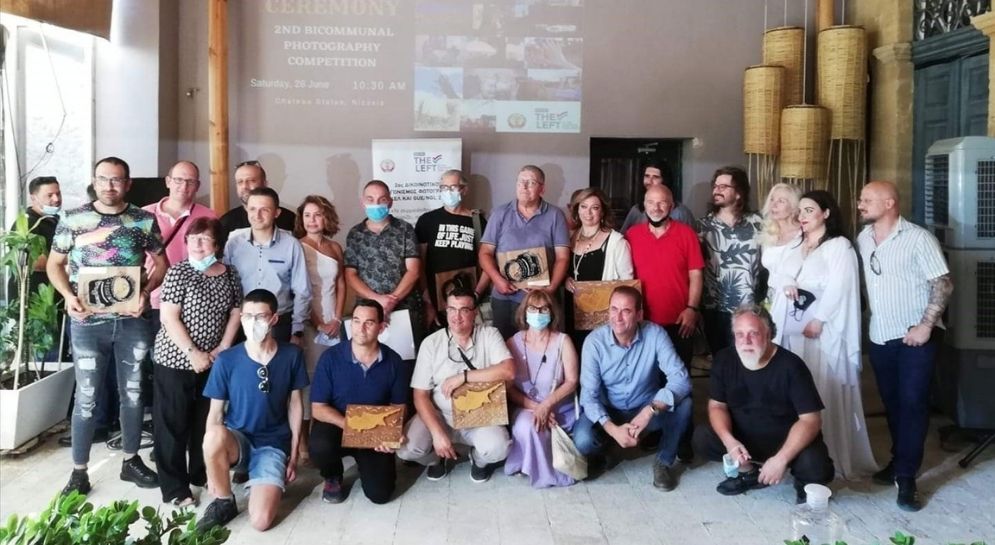 I would like to welcome you to the award ceremony of the 2nd Bicommunal Photography Competition organised by AKEL and the Left – GUE/NGL. It is with great pleasure that we managed to organise today’s event, after several postponements, due to the restrictive measures that were in place all through the previous period. It is a special pleasure, above all, that we can, after a long time, meet again Greek Cypriots and Turkish Cypriots together in a beautiful bicommunal gathering like this.

Through the photographs of the competition we can look at the Cyprus problem as seen through the images captured by Greek Cypriots, Turkish Cypriots and photographers of other origins. Images through different artistic approaches and from different parts of Cyprus. Images that show on the one hand the tragic aspect of the unacceptable partitionist status quo, but at the same time also send us hopeful messages for a peaceful future, through the liberation and reunification of our homeland and people.

Looking at the photos, we see what weighs heavy in our hearts and reminds us that this is not the Cyprus of the bleak partitionist status quo that we want; that we do not deserve the Cyprus of barbed wires of division, checkpoints, tension and dangers and everything else that characterises the ongoing division that we have been suffering from, both Greek Cypriot and Turkish Cypriot, for the past 47 long years.

A status quo that is neither sustainable nor static, given that the barren passage of time further consolidates day by day the fait accompli of the occupation and division, both on the ground and in the minds of many of our compatriots.

We aspire and are struggling for a different Cyprus. The Cyprus that we deserve and that we ought to hand over to future generations.

A reunited and federal Cyprus that is free from the control and interference of any third party and that restores human rights and freedoms.

A Cyprus that heals open wounds in a way that leaves no room for any new tragedies to be repeated but instead, in place of the current anomaly and deadly dangers that exist for our people, a Cyprus that builds a future of cooperation, prosperity and peace for all the children of our motherland Cyprus.

We will continue to struggle for this goal, undeterred by the current negative circumstances on the Cyprus problem. On the contrary, we will struggle with our Turkish Cypriot compatriots, with whom we are united by common interests for the reunification of our homeland.

We will struggle with the entire Cypriot people to breach and overcome what is perhaps the deepest deadlock the Cyprus problem has witnessed, which is also the most dangerous and marginal in the history of the Cyprus problem.

We will struggle at all levels to get reunification train back on track.

Reunification is not a circumstantial policy for AKEL, but an arena of political struggle written in our DNA. It is a history that has its roots in the common struggles waged by the Greek and Turkish workers for a piece of bread, in the struggles after 1974 to heal the wounds opened between the two communities by the crimes committed by the chauvinists in both communities, the Turkish invasion, the occupation and the promoters of nationalism and neo-fascism up to the present day. These legacies guide us in our struggles today.

I conclude by conveying, on behalf of the Central Committee of AKEL, warm congratulations to all those who worked for the successful organisation of the 2nd Bicommunal Photography Competition. I extend special congratulations to all the participants and especially to those whose photographs were distinguished in the competition. Finally, permit me to congratulate the Award Committee and organising committee of the competition, as well as the Rapprochement Bureau of the Central Committee of AKEL.

We hope that this fine bi-communal competition will become a custom, following the same successful path in the future.