Home  |  News   |  Speech by the General Secretary of the Central Committee of AKEL Stefanos Stefanou at the event organised by the C.C. of AKEL dedicated to the religious groups of Cyprus 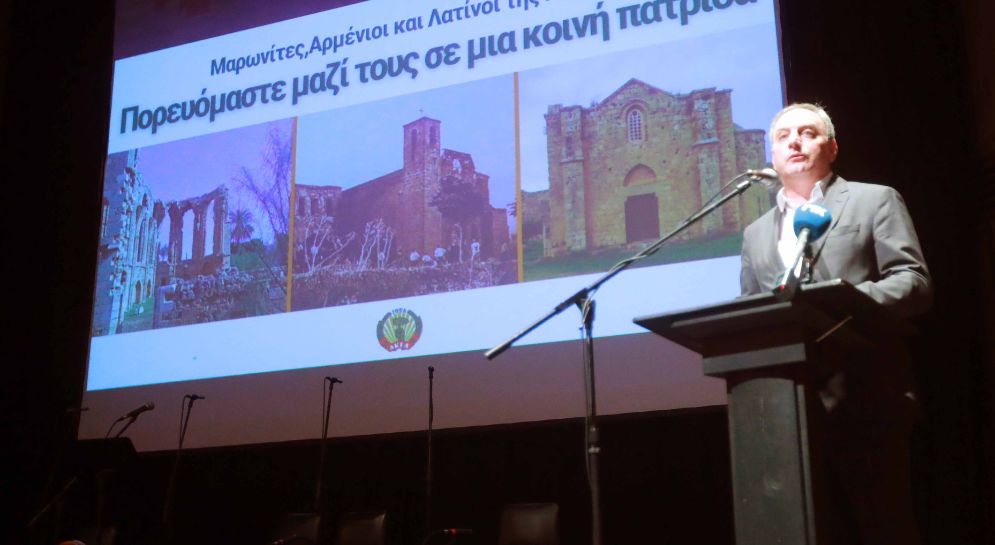 Speech by the General Secretary of the Central Committee of AKEL Stefanos Stefanou at the event organised by the C.C. of AKEL dedicated to the religious groups of Cyprus

It is with great pleasure that I welcome you all to our gathering tonight to pay tribute to the religious groups of Cyprus. This is a gathering of struggle for our common homeland.

Maronites, Armenians and Latins of Cyprus are a living and integral part of our homeland. Together we shaped and molded the rich tradition of our people’s struggle for freedom, independence and reunification. The Maronites, Armenians and Latins of Cyprus constitute a vital part of our people’s cultural and religious heritage and represent a catalyst in our country’s social, economic and intellectual development and prosperity.

Cyprus, because of its geographical location, has always been a bridge of cultures. A refuge for the persecuted. An oasis for suffering people. For all those who are have suffered and endured wars, persecutions and ethnic cleansing.

As our great poet Tefkros Anthias aptly noted in 1947:

“My homeland is a like a stone in the sea

Founded here as a promise of peace

For tired birds from their journey

A shelter its hospitable roof”.

What a beautiful and vivid description!

In the journey of life and survival, Cyprus has on many occasions in its history opened its arms to all those who came from elsewhere, carrying with them horrific adventures of pain and misery. But they all gave back in return the hospitality in abundance.

Our fellow compatriots Maronites, Armenians and Latins have Cyprus as their second home. They became one with the daily struggles of our people for a better life. They left an indelible mark on our people’s small and great struggles and became an integral part of them without ever losing their identity, which they added to the multicultural richness of our country.

They rightly took on the burden with struggles and sacrifices when our country was being tested by the Ottoman Empire and the English colonizers. Together with the Greek Cypriots and Turkish Cypriots, they experienced the consequences of the treacherous coup d’état and the Turkish invasion, but they remain consistent to the just struggle of the Cypriots for liberation and reunification.

I want to highlight the contribution of our compatriots in the struggle of our people for vindication, which can only be achieved through the achievement of a solution to the Cyprus problem.

On this occasion, I once again stress AKEL’s firm opposition to partition and our consistent commitment to the agreed basis for a solution of Bizonal, Bicommunal Federation with political equality as outlined in the relevant Resolutions of the UN.

At a time when Turkey is exploiting the prolonged stalemate to promote the consolidation of partition, it is imperative that the Greek Cypriot side take concrete initiatives to restore its international credibility and create momentum for the resumption of negotiations from the point where they had remained at Crans-Montana. If we do not move for a solution, no one will do it for us. Turkey is not settling Stagnation and deadlock on the Cyprus problem is convenient for Turkey as it implements, over the years, the objective of achieving permanent partition.

The contribution of the Maronites, Armenians and Latins to the cultural struggles of our people remains special and distinctive to this day as they inject our culture, values and traditions with a significant level of cultural/artistic development and creativity.

In the socio-economic sector, they lead the way in important sectors and branches of Cyprus’ economy, such as trade, agriculture, crafts and business. Their know-how, science and experience are very important for the economic development of Cyprus.

The religious groups of Cyprus are actively and continuously participate in the social struggles for the progress and prosperity of our country, working people and popular strata, from the establishment of the Co-operative movement to the great miner’s strikes waged in Mavrovouni and Skouriotissa.

Cultural identity is a characteristic that defines every people. Particularly in the current conditions of globalisation, where social and cultural erosion and levelling is accelerating, multiculturalism is an asset. This asset is also due to our compatriot Maronites, Armenians and Latins, who have never abandoned their customs and traditions, but on the contrary are cultivating their language and culture.

They founded cultural and sports associations with important people of the letters and the arts, as well as sports distinguishing themselves.

They operated charitable foundations and welfare associations to support people in need, warmth and solidarity.

To cultivate the religious feeling of their people, they established dozens of places of worship. Agia Sophia and the Cathedral of the Holy Cross in Nicosia, Agios Nikolaos in Famagusta, Agios Georgios in Kormakitis and the Church of Panagia Chariton in Larnaca are among the most important monuments of religious and cultural heritage.

Throughout its long history, Cyprus has been a point of meeting and cooperation of various peoples. Maronites, Armenians and Latins have contributed and continue to contribute to Cyprus’ cultural and heritage mosaic.

For AKEL, the protection of religious groups is not simply a contractual obligation. It is part of our very ideology, our identity, our history. It is a common path and perspective. It is our Cyprus!

We support the efforts of the Maronite representatives to further cultivate Cypriot Arabic and to introduce Maronite students to their own culture.

We support the efforts of the Armenians to further promote the Armenian language among the children attending their schools and to maintain the activity of the associations and organizations that keep their history and culture alive.

We support the efforts of the Latins to preserve the historical and social contribution of their religious group.

The state must help towards the further development of education, supporting organizations and other structures that operate on the responsibility and initiative of representatives of the religious groups.

In conclusion, I would like to thank the representatives of the religious groups in the Parliament, Mr. Giannakis Moussa, Mr. Vartkes Mahtesian and Mrs. Antonella Mantovani, for their cooperation in making tonight’s event possible.

Many thanks to all those taking part in the cultural programme of the event, as well as to all those who contributed to making this beautiful and event conveying its own message a reality.

Developments once again prove the devotees of NATO in Cyprus wrong