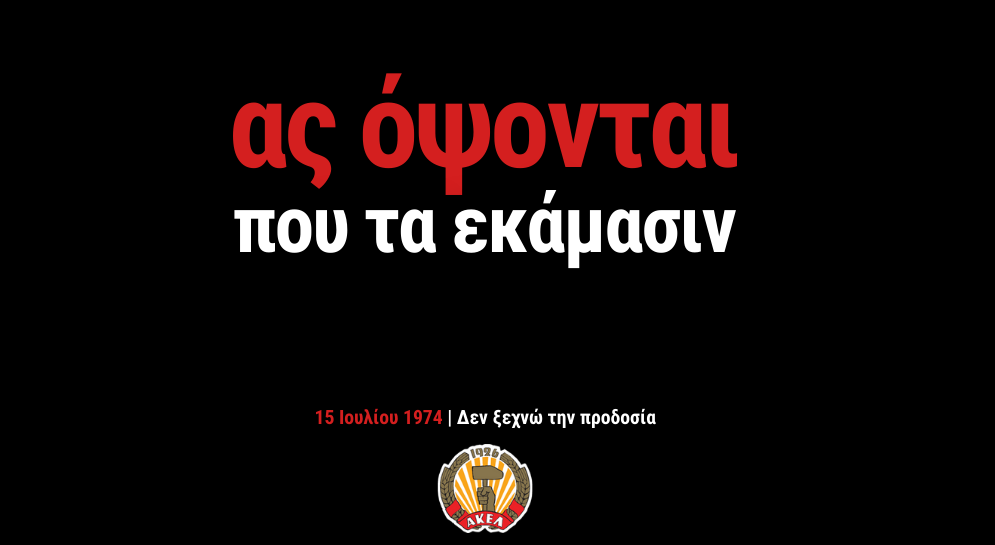 AKEL on the 47 years since the fascist coup: Resistance – Democracy – Freedom

15th July 1974 is the day when the greatest betrayal was committed against the Cypriot people. It is the day when Greek and Greek Cypriot fascism lit the fuse for the bloody massacre of our homeland. The coup and invasion were part of the same NATO plan for the division of Cyprus and were carried out, deliberately and in coordination, by the Athens Junta, EOKA B and the militarists of Turkey.

No matter how many years pass, the people of Cyprus will never forget who betrayed our homeland and turned their weapons against democracy.

It does not forget that chauvinism and jingoistic patriotism were accomplices in the crime committed against Cyprus.

It does not forget that at the same time as the sons of our people were sacrificing their lives for the freedom of our homeland against the Turkish invading army the supra-nationalist coupists were hiding in the rear behind the frontlines of battle.

Those who think that history and truth will be erased or turned upside down are fooling themselves.

Today, the people of Cyprus pay tribute to the democratic resistance against the coup and fascism.

It honors the fighters who defended democracy and the lawful government of Makarios, at the bastions of the Resistance, at the Presidential Palace, the Archbishopric, Kaimakli, Eftapato, the Third Gymnasium of Limassol, at Kolossi, the city of Paphos and the working class neighborhood of Ayi Yianni Larnaca.

It honors the memory of those who were murdered for refusing to carry out the coupist’s orders.

We honor the democrats who heroically stood up to the coupists in prisons, during interrogations and torture.

We honor the heroic people of Cyprus who held high the banners of resistance and democracy.

The 47th anniversary of the twin crime of the coup-invasion finds our country at a painful moment as the occupying power Turkey is planning to impose new fait accompli to consolidate the occupation, partition and the colonisation of the occupied areas.

AKEL addresses a call of struggle and determination against the new fait accompli, against the final partition of our island. For an unyielding struggle for the liberation and reunification of Cyprus, for a solution of the Cyprus problem on the agreed basis and framework.

On the occasion of the black anniversaries of the fascist coup d’état and the Turkish invasion, the Central Committee of AKEL is organising a commemorative event Thursday 15th July 2021 8:00pm at the Municipal Amphitheatre of Lakatamia. The main speaker at the event will be the General Secretary of the Central Committee of AKEL Stefanos Stefanou. A cultural programme will follow.

The government is closing down Famagusta Hospital