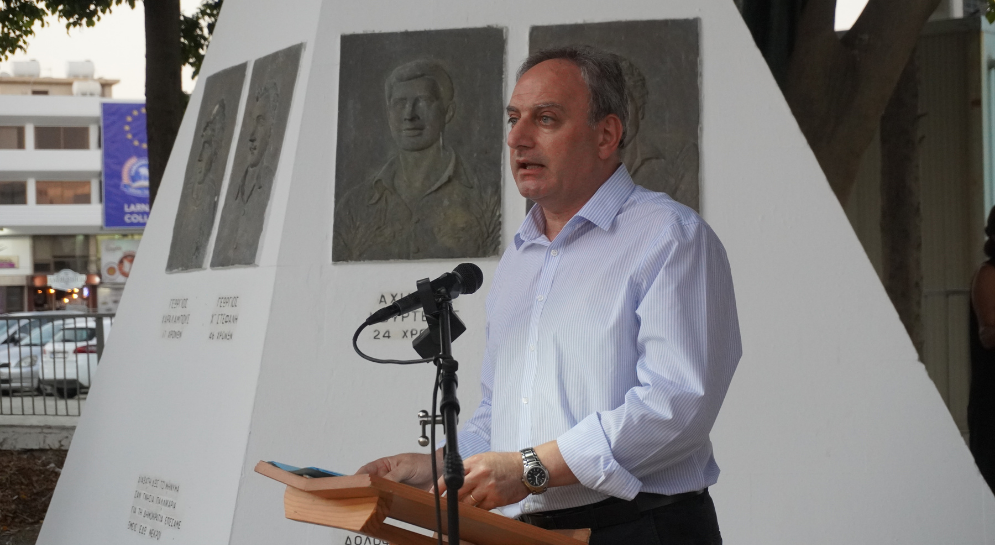 We do insist because we refuse to agree with Cyprus’ condemnation.

We refuse to hand over half of Cyprus to Turkey.

In July 1974 the People’s Movement of the Left paid a heavy price in the battle to protect our people from the fascists and invaders. Hundreds of our militants and members were arrested, imprisoned, tortured and murdered. True patriots, raised with the ideals of independence, freedom and democracy, they didn’t hesitate not for a single moment to again be on the front line of the fierce battle that would commence.

When fascism took to the streets bearing Kalashnikovs holding democracy at gunpoint, our heroes already had chosen sides. They stood in front of them to defend democracy. The four heroes of the working class neighborhood of Ayi Yianni all climbed into a truck with other comrades to reinforce the democratic forces.

That’s how the left had raised them. To struggle, even if alone, even if unarmed, for the ideals of the homeland, democracy, freedom and for the dignity of the people and society. That is precisely why every July we lay wreaths at the tombstones of our heroes because everyone on that July chose which side to be on.

On the side of democracy and freedom were hundreds of our comrades and fellow fighters. On the side of fascism were those who, in the name of the homeland, committed the greatest crimes committed against Cyprus and our people. Those who subsequently, when the Turkish army invaded Cyprus, shamelessly opened the detention centres where our comrades were imprisoned to send the people of the Left and progressives they had arrested to the front line of the war, while they themselves went into hiding having disappeared – just as the cowards who opened fire and murdered the four heroes we honor today went into hiding.

Forty-seven years onwards, they say nothing about the real role of Grivas, about the betrayal committed by EOKA B that paved the way for Turkey to invade.

Forty-seven years later, they engage in half truths. They talk about the Cypriot tragedy referring only to the invasion, forgetting any reference to the coup. But without the coup, the invasion wouldn’t have happened. As long as we live and breathe in this country we will remind them of that.

That is precisely why we never tire of insisting, fighting for liberation and reunification. Because forty-seven years onwards, the black and white photographs of our heroes remind us of the debt to vindicate their sacrifice. Because the future sets the following question: which homeland will we hand over to our children? A homeland divided in half, burdened with threatening armies? Or a homeland free and united, a mother to all her children?

There is no other alternative for us. There is no other answer. The final vindication of our heroes, the final redemption of future generations will be achieved with the liberation of our homeland, by putting an end to the Turkish occupation; with the reunification of our homeland and the reunion of its children:  Greek Cypriots, Turkish Cypriots, Maronites, Armenians and Latins in conditions of permanent peace, security and cooperation.

The Turkish provocative actions and threats, the developments in Famagusta must at long last seriously concern all of us and first and foremost President Anastasiades, who is handling the Cyprus problem.

The Turkish stand is given. Its behaviour is unacceptable and provocative. The question is what must we do and how can we confront Turkey’s new challenges, which are bringing us closer to the final partition of our country.

We must at long last come out of the corner we are in and make substantive moves. It is necessary to address with letters the United Nations and the international community. These efforts, which must be intensified, are essential. But they aren’t enough to move the Greek Cypriot side forward. It is imperative that we move forward by taking concrete initiatives to create momentum for resuming negotiations.

AKEL addressed Mr. Anastasiades long before the convening of the informal Geneva conference and submitted a proposal on what it believes must to be done to resume meaningful talks. On how and from where negotiations should resume. On how we can turn natural gas into an incentive for the resumption of negotiations.  And if this proposal still won’t yield results, then the Greek Cypriot side should not be held responsible for any deadlock. We of course do not claim that our proposal will deliver results. However we believe it is correct, as it responds to what the UN Secretary General himself has called for in the reports he has submitted.

But that does not mean that our proposal should have been discredited and distorted by Mr. Anastasiades. This contradiction is happening with those in power. They parade in the mass media posing the question “but why is the opposition complaining? What else do they want us to do?” and when AKEL proposes what else they can actually do, they are indifferent to its suggestions.

We must draw conclusions from history. In 1974 AKEL issued warnings but it was denigrated and ridiculed. They held it at gunpoint as soon as they took up arms. But unfortunately, a thousand times unfortunately, AKEL’s warnings proved to be true. Today too AKEL insists on warning of the sufferings that will befall the Cypriot people if this situation were to continue. We are on the brink of the final partition of our homeland, but nothing is over yet.  With initiatives, realism and dedication to principles, we can achieve the resumption of talks aiming at a solution of bizonal, bicommunal federation that will liberate and reunite our country and people. A solution that will restore human rights and basic freedoms to our land. A solution that will make our people the true masters of our Cyprus.

It deserves a peaceful future.

It deserves to live all that the four heroes of Ayi Yianni and hundreds of other heroes rushed to defend in 1974.

For us, their sacrifice is a banner of struggle and on it is written with their blood the sole truth of this land: “CYPRUS – ONE COUNTRY, ONE PEOPLE!”

We shall persevere until the final vindication!

Our heroes and martyrs are Immortal!