Home  |  News   |  Speech by General Secretary of the C.C. of AKEL S.Stefanou at the mobilisation outside the Presidential Palace 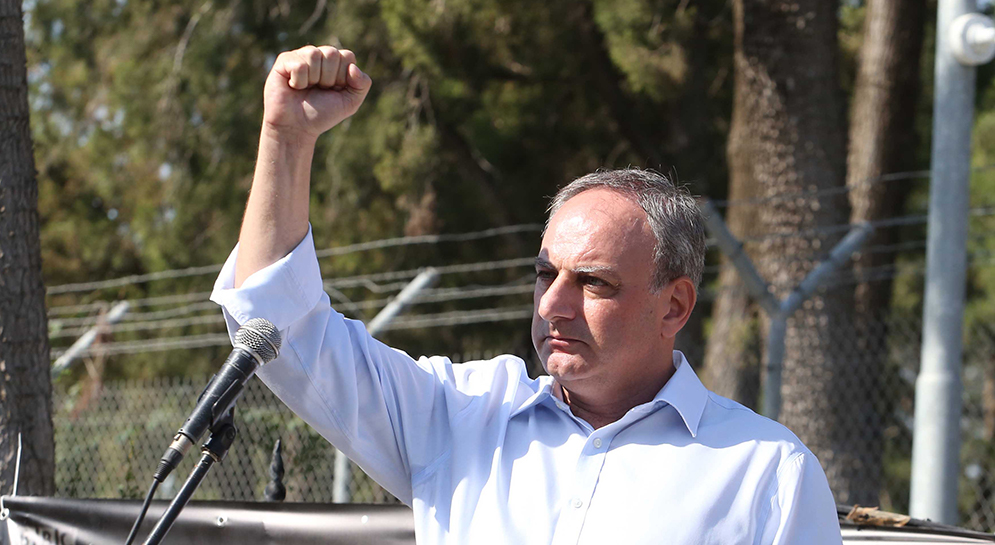 Speech by General Secretary of the C.C. of AKEL S.Stefanou at the mobilisation outside the Presidential Palace

When we took the initiative to organise this mobilisation, some people asked us: Why now?

We answer: Because enough is enough – no more!

When our homeland is being humiliated, things can’t go on like they have any more.

When institutions are being undermined brutally, no more – enough is enough.

When Cyprus is becoming an international laughing stock, no more – enough is enough.

This is what brought us all here today!

This is what we have come here to shout out loud today, because this is what our patriotic and democratic conscience demands.

We are not engaging in opposition for the sake of opposition, nor are we looking for opportunities to do so. We have proven many times how constructive and positive we are.

First of all, we prove it every day, by remaining committed to the effort to solve the Cyprus problem, even if those in power try to ridicule us.

We proved it by supporting the great social reform of the National Health Scheme.

We prove it by supporting those decisions that help the country, society and assist working people.

However, Nicos Anastasiades and the government of the Democratic Rally DISY party have left us no more room for tolerance. They have long since exhausted these margins.

We don’t have the right, both as a Party and as democratic citizens, to watch our country’s humiliation from the armchairs of our homes.

That is why we had to take to the streets: To meet with those of our compatriots – regardless of their party and political affiliations – who share the same immense anger.

The Pandora Papers were not, of course, a bolt from the blue. For years, clouds have been gathering over our country’s skies until today’s storm broke out.

It is worth refreshing the faint memory of those who boast that they don’t understand how we got to the point where authoritative international mass media outlets are calling the President of the Republic of Cyprus: “The Offshore President”:

It was only a matter of time before this scandalous practice became known beyond Cyprus’ borders.

The messages sent out from the European Union and elsewhere were numerous and categorical, but the Presidential Palace and ruling DISY party refused to listen.

Until the major foreign mass media outlets took up these issues, which the government ruling forces cannot control or silence, and Cyprus became an international embarrassment.

The Pandora Papers are the last straw that broke the camel’s back.

That is why when people ask “why now?” we reply “because enough is enough – no more”!

What we are saying, and shall repeat until the government ruling forces get it through their heads, is that IF there was any elementary political sensitivity, then Nicos Anastasiades should have gone home long ago. We are under no illusion that this will happen. We have the political realism to understand that there is no way that Nicos Anastasiades is going to be moved from his office.

So many scandals, so much institutional entanglement, so much conflict of interest, no resignation and no assumption of responsibility during the term of the government of ruling DISY.

In other countries, for far more less, leaders take on their responsibility and resign. In Cyprus, the government ruling forces make excuses or shift their own responsibilities onto others, even though our country’s prestige has been shattered internationally.

While citizens are offended because our country is being humiliated around the world, the government ruling forces are looking for scapegoats.

We have an obligation to put a stop to this downhill path.

We must stand up and unite our voices.

When the European Parliament names the President of the Republic of Cyprus in its resolution, it is clear that things can’t get any worse.

We have a democratic and patriotic duty to send out a clear message to Nicos Anastasiades and his government’s pillar of support, the Democratic Rally DISY party:

Enough is enough – no more!

This country doesn’t belong to you.

Reacting to today’s protest mobilisation, the government and DISY – as always in full coordination – accuse us of being nostalgic for chaos and disintegration.

We reply: if we were indeed like that, we would not protest, we would not react. We would have settled for what we are all living through today: chaos, disintegration and the international humiliation which was caused by the Anastasiades-DISY government.

Amidst the whirlwind of negative publicity caused by the Pandora Papers, the DISY President has launched the 2023 presidential election campaign.

Under the central slogan “the day after” he called on the people to “renew the Agreement” for the Cyprus of tomorrow.

DISY President Averof Neophytou is provocative and forces us to point out the obvious: either he doesn’t understand the country’s humiliation by his government, or he does understands it and is blatantly mocking us.

In any case, what the people do not forget is that the President of DISY and his party are part of the picture of depreciation and corruption caused by the actions and policies of Nicos Anastasiades.

But since they so badly want us to, let’s talk about the day after.

The day after will be a day when Cyprus will not be ruled by those who have made our homeland the subject of a tradeoff.

It will be a day in which political ethics will prevail and not complicity and institutional corruption.

It will be a day in which institutions are respected and not undermined.

It will be a day in which citizens are not mocked and misled by countless Presidential meaningless “pledges”’ and hollow promises.

To get to the day after, we must turn the page.

To realise that tolerance has brought us to the point we are today.

We must shout out loud “no more – enough is enough” and be determined to do something about it.

Because a weakened and unreliable Cyprus is undermining the future of its children. The future of our own country.

Because we are at a turning point where the future looks bleaker than ever.

Time and Turkish intransigence are gnawing away at the hopes for a solution to the Cyprus problem that should achieve the liberation and reunification of the country and its people.

What are we doing – that’s the question.

We, as parties, but also “we” as individuals.

It is this “we” that has brought us here today.

To demonstrate our conviction that we deserve a better and brighter future.

A country that will regain its credibility both at home and abroad.

Nicos Anastasiades and DISY, trapped in their small world, are clearly incapable of understanding that our people have exhausted their strength.

Only if we shout loud enough will our message find recipients.

No more – enough is enough!

We must turn the page and open up a new era for our Cyprus. Progressive change has never been more necessary than now.

We will continue to work for it!

For the Cyprus we deserve!

AKEL Vera Polycarpou: Its wishful thinking to assume that Erdogan’s regime is collapsing