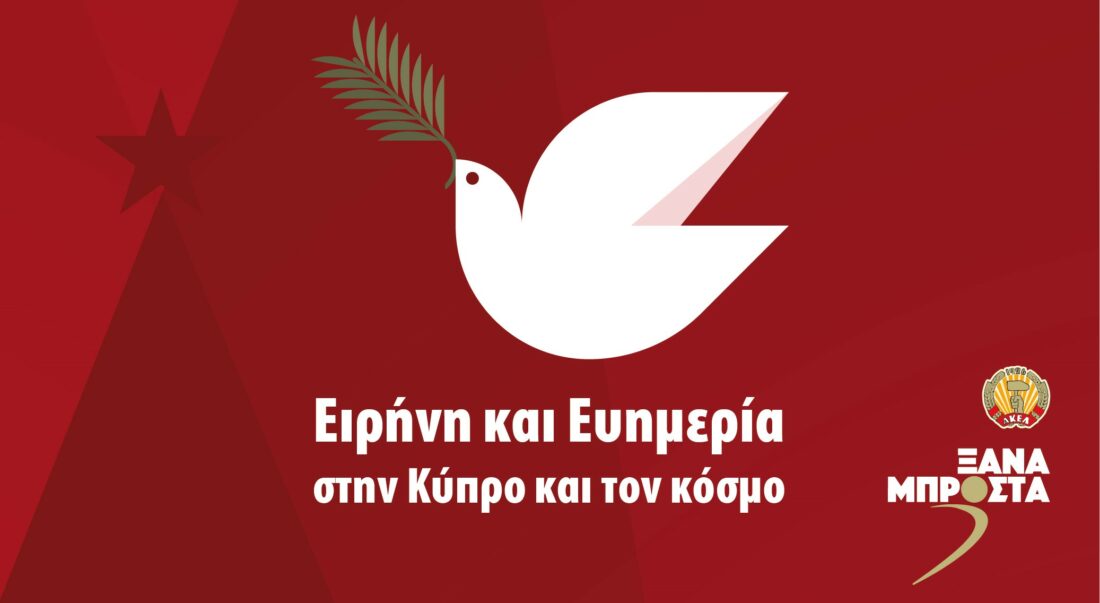 AKEL NEW YEAR MESSAGE: A message of unity, rallying of forces and optimism

AKEL wishes the entire Cypriot people – Greek Cypriots, Turkish Cypriots, Maronites, Armenians and Latins – as well as the refugees and migrants living and working in our country, that 2022 will be a year of health, peace and progress. We assure everyone that AKEL will continue its action and struggles even more resolutely for all that our people and homeland deserve and are entitled to. For the vindication of Cyprus, for reunification and peace. For the just cause and rights of the people of labour. For the visions and aspirations of our country’s young generation.

The advent of the New Year finds humanity suffering from a new outbreak of the pandemic. We all wish and hope that 2022 will lead, by making use of the weapon and tool of science, to the definitive end of the pandemic and with it an end to all the restrictive measures that are exhausting societies all over the world. We recall, of course, that as long as vaccine patents are not abolished, many millions of people in the poorest countries of the world will not have any access to vaccines, with incalculable consequences in terms of human lives and for the overall fight against coronavirus.

Apart from the pandemic, the people of Cyprus are experiencing a reality that is far from the government’s empty talk of ‘reform’ and ‘recovery’. Price hikes, low wages, the aggression demonstrated by the banks, poverty and inequalities and the dire state of public hospitals are what the overwhelming majority of society are confronted with every day.

AKEL’s pledge of responsibility towards the workers and people is that in 2022 it will further intensify its assertions, both inside and outside Parliament, for the regulation of labour relations and dignified wages, for the full restoration of the Automatic Cost of Living Allowance and the adoption of measures to combat price hikes and the high cost of living, for legislative interventions to put a brake on the arbitrariness of the banks, for the defence of the public education and health system, so that the welfare state can be rebuilt.

At the same time, the phase that the Cyprus problem is going through makes it imperative for everyone to reflect in a responsible manner with history in mind about what course the country and the future of the next generations of Cypriots is taking. Turkey is consolidating its occupation, escalating its aggression, strangling the Turkish Cypriots and demanding in a more provocative way than ever before the permanent partition of our island. Unfortunately, however, the support of the international community, including the EU, is proving to be merely verbal.

In the face of this situation, a consistent policy needs to be pursued in order to effectively prevent the Erdogan-Tatar duo from fulfilling their partitionist plans. What is demanded is a policy that drives developments towards the resumption of the negotiations from the point where they were broken off in 2017, given that this would automatically nullify the occupying power’s machinations. We must all work and struggle to overcome the current disheartening outlook surrounding the Cyprus problem and to revive the hope for a solution, for liberation and reunification.

2022 will be a decisive year for the cause of change in the governance of the country. AKEL shares the anxiety not only of the people of the Left, but also of every progressive and democratic citizen of the country to rid our country of a government of corruption, arrogance and powerful economic interests. AKEL assures the people that it will do everything in its power to ensure that 2023 will mark a change in governance and for a new course for our Cyprus. To this end, we address a message of unity, rallying of forces and optimism to every Cypriot who believes that Cyprus and its people deserve better.

With hope and determination, AKEL wishes all the very best for the New Year to all.

Statements by the General Secretary of the C.C. of AKEL S.Stefanou during his visit to the offices of SPAVO

New Year's Day message of the General Secretary of the C.C. of AKEL Stefanos Stefanou