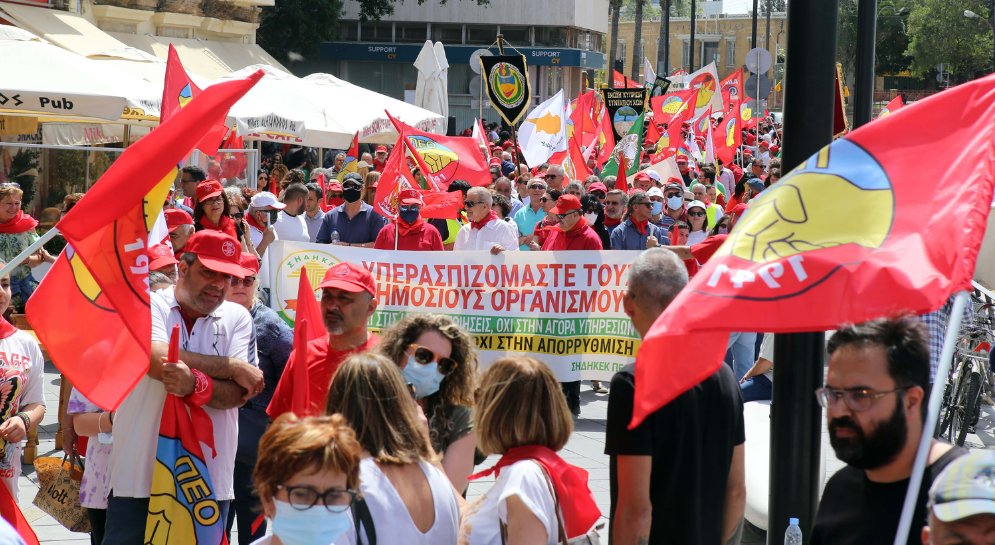 On the occasion of Worker’s May Day, AKEL addresses the entire working class, all the working people of Cyprus, Greek Cypriots, Turkish Cypriots, Maronites, Armenians, Latins and immigrants working in our country.

We address a message of organization and struggle for the just cause and rights of working people, for the dignity and prosperity of the people of labour, that is to say, those who really drive the economy and produce the wealth in our country and throughout the whole world.

We honor the heroic Chicago May Day of 1886 and all the heroes of the working class all over the world who painted the banners of the organised workers’ struggle red with their blood.

We honor the pioneering workers of Cyprus, both Greek Cypriots and Turkish Cypriots, who from the beginning of the last century laid the foundations of the worker’s movement of our country. Who made history in the mines, on the construction sites, in the factories; who clashed with employers, colonialism and strike-breaking scabs in fierce class struggles.

We honor the generations of the working class who won for today’s working people gains and rights that made the lives of our people really better.

The history and the timeless meaning of Worker’s May Day in Cyprus is by definition identified with the struggle against chauvinism and the division of our country and people. The workers and the entire people of Cyprus, Greek Cypriots and Turkish Cypriots, will only lose if the partition of our island is finalised. For this reason, AKEL joins its voice with the trade union organisations on both sides of the barbed wire of division that every year turn Worker’s May Day into a rally asserting an independent, free and united homeland. Without the occupation, the checkpoints and barbed wires of division.

At the same time, this year’s Worker’s May Day becomes a podium for peace and an end to the war in Ukraine. Our people and the peoples of the world are worried by the unprecedented ongoing militarisation underway in Europe and internationally, by the nightmarish possibility of an open Russia-NATO conflict, by the European Union’s continuous pumping of tens of billions of euros into new armaments that only add fuel to the fire. We are worried by the chain reaction of economic consequences as a result of the war, which are hitting the working peoples of the European states with price hikes, the high cost of living, lack of goods and unemployment.

In the face of this, this year’s Worker’s May Day has at its forefront the popular demand for the government to end its indifference and to take measures against price hikes/increases that, even before the war, are gnawing away at the living standards of the people. We demand a reduction in VAT and a cap on essential goods, the abolition of double taxation on fuel, a reduction in VAT on electricity and the inclusion of all low income pensioners in the special electricity tariff.

At the same time, AKEL, both inside and outside Parliament, supports the demands of the worker’s movement for the restoration of the Cost of Living Allowance (COLA) and its extension so that it can cover every worker in the country.

For the establishment of a minimum wage and minimum working conditions for every worker.

For the protection of collective labour agreements.

For the defence of the social character of the National Health Scheme.

For the abolition of the 12% penalty on those choosing to retire at 63.

For a modern social policy that embraces young couples and working parents.

AKEL commemorates Worker’s May Day by strengthening its struggles for the modern rights of working people, for a socio-economic policy that serves the many and not the powerful private interests, but also for the progressive change in the governance of the country that the people and workers need. AKEL calls on the working people of Cyprus to participate in mass numbers in tomorrow’s May Day mobilisations organised by the class-based trade union federation of PEO in all cities.

Long live the Workers’ May Day!

AKEL meeting with the ‘Famagusta for Cyprus’ Initiative