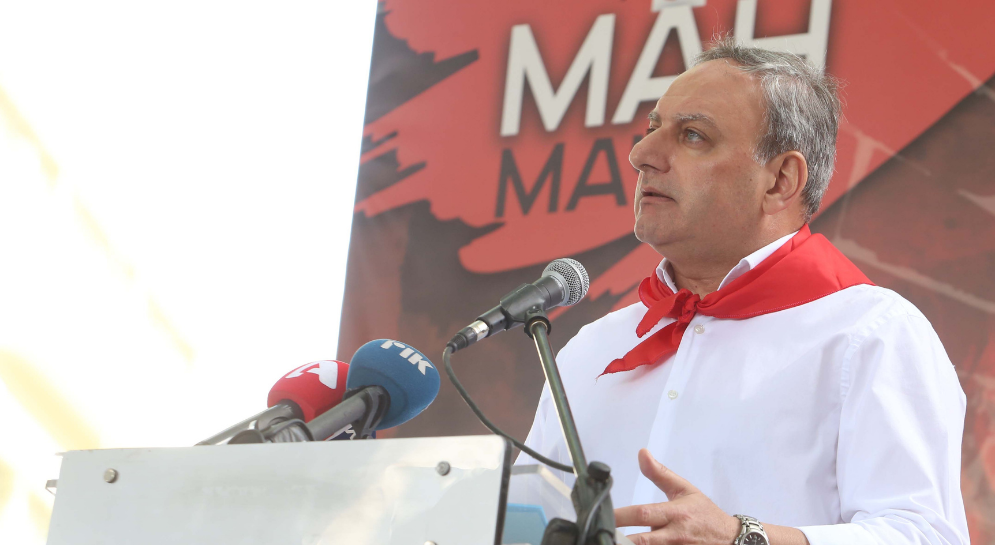 The anniversary of Worker’s May Day moves and stirs all of us who believe in the prospect of a better world. It moves us because it expresses in a compact way the long, hard and sometimes bloody struggles waged by working people for rights at work and dignity in life. It moves us because it reminds us that progress and prosperity are not given away, but are won through collective efforts, assertions and struggles. It reminds us that the strength of the working and popular masses lies in organising and uniting their forces.

Worker’s Day is inextricably linked to class, social and political struggles throughout the world. It is a symbol of struggle and sacrifice for working people’s struggles.

Workers’ May Day is for us a day of homage to the Chicago pioneering workers. It is a day of solidarity with working people around the world. A day of regrouping our forces for the struggles that are being fought. For better working conditions. For dignity in life. For a life with rights.

The pandemic on the one hand and the ongoing war in Ukraine and its consequences on the other, have shifted attention from the very difficult conditions experienced by workers and societies. An environment made even more difficult by the neoliberal policies being implemented.

Policies that undermine the welfare state.

Policies that increase class and social inequalities and push millions of people to social marginalisation.

Policies which expose a large section of modern societies to economic insecurity.

Policies that are looting the wealth from many poor countries, plunging them into misery, hunger, wars and conflicts.

This is the modern world that gives rise to the root causes for the far right and fascism to return to the fore. The appeals being issued by Europe’s ruling circles to tackle the far right are not enough and are not effective unless they really address the socio-economic problems of the popular strata which they only remember when forced to serve electoral needs.

The situation in the modern world, for the umpteenth time in human history, calls for the waging of new struggles and the assertion of demands, for the rights of working people and for the rights and freedoms of societies against the authoritarianism, conservatism and greed of powerful interests and big capital.

This is a microcosm of what we are facing in Cyprus too.

More specifically, with the Anastasiades-DISY government governing the country, the future for working people and their demands is getting bleaker and bleaker.

The government ruling circles neither want, nor can they clash with powerful interests. These are precisely the interests they serve. This is the government that supports and promotes the deregulation of labour relations and the imposition of work without rights.

The government ruling forces neither want, nor can they offer relief to people to tackle price increases and profiteering, because they live in another, parallel virtual reality that has nothing to do with the pitiful reality tens of thousands of our struggling citizens are suffering.

But what is this wretched reality?

Wages and benefits that have remained stagnant for years on the one hand and sharp increases in the price of essential goods on the other. Thousands of households and small and medium-sized businesses are struggling to make ends meet. Incomes are being eroded by poverty and production costs have reached unprecedented levels.

Poverty and economic uncertainty are combatted through concrete actions, not with empty talk and meaningless promises.

AKEL has for some time now been submitting specific proposals for workers’ relief and protection from price hikes. Proposals for substantial reductions in the price of electricity, such as the proposal to reduce VAT from 19% to 9%. For a reduction in fuel prices by abolishing double taxation and the introduction of a cap on fuel prices. For the combatting of profiteering by exercising continuous and effective controls on essential goods.

Today, when 1 in 10 workers in Cyprus are threatened by poverty, the shielding of working people – and especially the most vulnerable groups of the population – has never been more urgent. AKEL is demanding, and will continue to demand, the full restoration of the Cost of Living Allowance and its extension to cover all working people. It demands an adjustment of social benefits and support for low income pensioners. AKEL promotes the demand for dignified minimum wages without the erosion of collective agreements and abolition of workers’ rights.

The working people of our country cannot bear another five years of the DISY party in power. On the contrary, working people aspire to a progressive change in the governance of the country. A change that will provide a way out of the current deadlocks. A change in policies, priorities and ethos of governance.

AKEL is waging this battle with working people and society who are demanding progressive change.

A change that starts with rejuvenating the hope for our Cyprus and our people, Greek Cypriots and Turkish Cypriots, with the solution of the Cyprus problem, the termination of the Turkish occupation and the reunification of our homeland.

A change, to put a stop to our country being disgraced internationally and the dismantling of the welfare state and the rule of law.

A change that opens up prospects for our young people.

Today, we also send out a message of solidarity and support to all workers, migrants, refugees, unemployed, to all those who are struggling daily for a living wage. We stand by young people who are being tested by job insecurity, underemployment and humiliating wages.

We convey a special message of solidarity to our Turkish Cypriot compatriots who have taken to the streets in recent weeks with mass mobilisations to demonstrate against social and economic poverty.

The struggles of our Turkish Cypriot compatriots are also focused on securing the existence of their community. They are an extension of the struggle of the whole of the Cypriot people for reunification. And the only way forward for this struggle is none other than the solution of federation, the only way to end the partitionist fait accompli to the detriment of our homeland.

Together with our Turkish Cypriot compatriots, we will continue to wage the struggle for today and tomorrow. For peace and social justice.

We are not just honoring the glorious history of the workers movement. We are writing our own new history. We do not compromise with pessimism and fatalism. We raise high the banner of struggle and we continue.

There are no lost struggles.

Only the struggles that are not fought are lost.

AKEL wishes on the occasion of the celebration of Bayram