Home  |  News   |  Speech by the General Secretary of the C.C. of AKEL S.Stefanou at the event in honor of Demetris Christofias 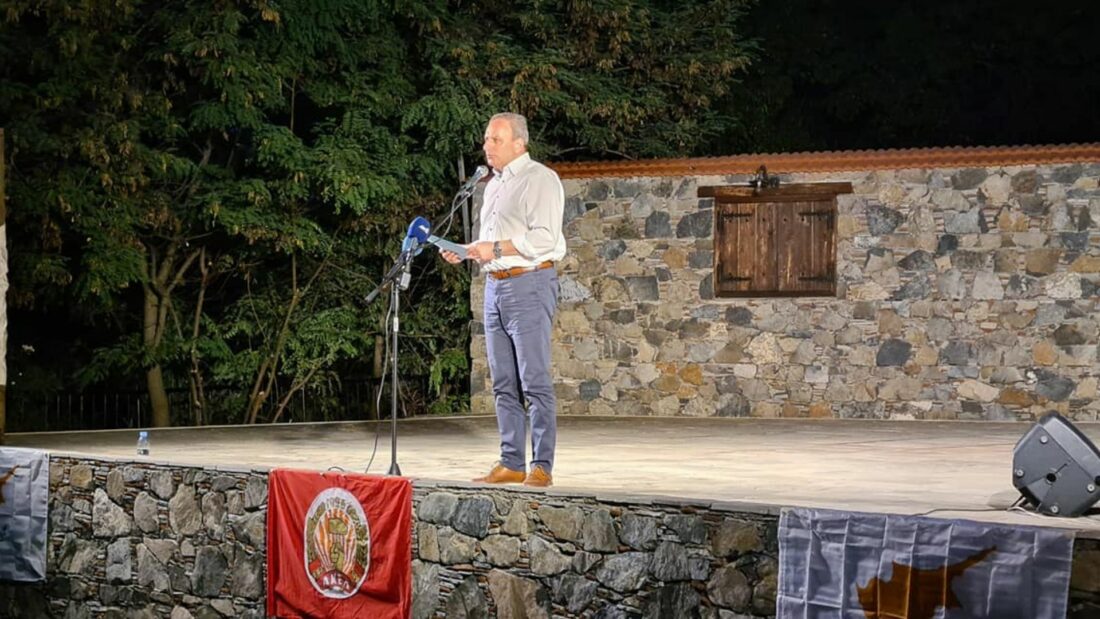 Speech by the General Secretary of the C.C. of AKEL S.Stefanou at the event in honor of Demetris Christofias

One might think “what more is there to say about Demetris Christofias?”

What more other than the love and honor that was bestowed upon him by the common people as they were bidding him farewell?

What more other than the recognition of his moral stature and honesty recognised by both political friends and opponents?

What more other than his great contribution to the struggles of the movement and Cyprus?

But when you talk about Christofias the stories that each of us can tell do not end.

Stories about the personality of a leader, but also about the simple and authentic character of a man. In any case, one cannot separate the two. Christofias was a leader and an ordinary man at the same time!

Instead of politics, the harsh life of political struggle, changing his character, Christofias succeeded in injecting politics his fundamental characteristic, namely his humanism.

This, together with his humbleness, sincerity and natural sense of humor, endeared him to the people.

Honest, direct, genuine and truthful. That’s how he won the hearts of the common people.

Demetris is one of those people who pass away from life, but at the same time you feel that he is with you. This is because their journey through life is so vivid, their mark on it so strong that his notable presence remains in our memories. In everything he did, in everything he lived and built.

I can tell you one thing with certainty.

There is a difference, a great difference, between someone being at the helm and being a leader. A leader will perhaps carry out his duties perfectly. But he will not take a bold step. The leader will inspire, will pull others with him on his path, will dare to swim in uncharted waters, think “outside the box”, to have the guts to act in a radical and decisive way, to go off the beaten track, to defy taboos and challenge stereotypes.

By his stand he gave content to Marx’s well-known position that “ideology is not a dogma, but a guide for action”. Steadfast on Marxist ideology, unwaveringly consistent to the principles of the Left, he had the ability, talent and charisma to identify the needs of progress, to make them the policy of the Left and to write history for the good of the country, the people, the common people, the workers.  This is what made him a leader, a historic leader of AKEL and a prominent figure in the international communist and workers’ movement.

Christofias assumed the leadership of the Party at a critical juncture. AKEL was facing an internal party crisis that threatened its very survival after the defeat it suffered in the 1985 elections. The movement internationally was in shock at the dissolution of the socialist community. Moreover, some leading members of AKEL were leaving the Party. So there were two choices to be made, one might say. Either AKEL would become something else, or it could put up a staunch defence and entrench itself, closing in on itself.

This is exactly where Christofias transformed himself from a General Secretary to a leader, putting his own stamp on the identity of AKEL.

He did not permit AKEL to gradually fade away in the instinct of self-preservation. He opened doors, keeping the character and identity of the party, which opened itself to society. He spoke with courage about ideological and political problems. He opened a debate with the party membership and people in general.  He made radical changes in the functioning of the Party to deepen inter-party democracy. The new leadership of AKEL under Demetris’ leadership moved forward instead of remaining stuck in old practices. With its actions and decisions, but also with its renewed discourse, the new leadership injected new life, boosted the morale and self-confidence of the people of the Left, who were experiencing the international situation stunned and in shock.

The results of this effort were not just quantitative. It was not just the fact that AKEL emerged from the 1991 elections winning over 30% of the vote.  The results were also qualitative. The dialectical relationship between theory and politics, the party’s active participation, intervention and action within the framework of the existing capitalist system to improve the living and working conditions of workers and for the progress of the country and society, developed dynamically and pioneeringly during the period of Demetris Christofias at the helm of AKEL. In other words, Demetris reshaped AKEL to adapt to the new conditions without denying the ideology, history and character of the Party.

He established AKEL as a mass party with a class character, playing a decisive role in developments.

Thus the big step of participating in a government was attempted, after the decisive step of electing Demetris Christofias to the presidency of the House of Representatives. This was followed by the participation of AKEL with leading and prominent members in the government of Tassos Papadopoulos. The taboo of AKEL not running for public office and not participating in the governance of the country was broke. This laid a solid foundations for asserting the presidency of the Republic in 2008 which was successful.

The experience of governance was the subject of much debate, both inside and outside Cyprus. It is worth dwelling on what is of strategic importance. On the Cyprus problem, the Christofias government inherited complete stagnation and delivered the Christofias-Talat convergences, which were denounced back then, but which today form the fundamental basis of the sought solution. The Christofias government opened up new horizons for the country on energy and natural gas. The Aphrodite field, which was discovered during the Christofias government, is the only confirmed field that the Republic of Cyprus has. The delimitation of the Republic of Cyprus’ Exclusive Economic Zone with neighbouring states has been decisively promoted.  Breakthroughs and reforms were made in labour relations and education. Changes were promoted in social policy, in the policy on the water issue, the state’s infrastructures were significantly strengthened, the issue of agricultural debts, which had been pending for decades, was settled and much more.

Cyprus will always remember that there was a President at the helm who saw the Cypriot people as one. Greek Cypriots, Turkish Cypriots, Maronites, Latins and Armenians. A President who envisioned their common future in their common homeland and paved the way for this to become, as he himself said, life and action. He spoke to the people about this vision clearly, honestly and sincerely.

These days, I cannot speak about Demetris Christofias without mentioning that July 1974 and the twin NATO crimes committed against our Cyprus had a profound impact on him, it forever marked his conscience.

Because he lived the crime committed from the side of those who suffered from this history. He was forced to flee from his village with his family, with nothing than the clothes he was wearing, with his newborn baby in his arms, facing the machine guns of EOKA B’ that marked them on the cobbled streets of his now occupied village of Dikomo. He rushed, like many other patriots, to join his military unit when the Turkish invasion took place and he was sent to transport the wounded from the battles at Nicosia airport. He lived the horror, the blood and the pain of becoming a refugee.

He was therefore a leader who studied history and drew conclusions, but he was also a leader who lived history. That is precisely why he insisted until the very end to defend the historical truth, to remind us how Cyprus got to where it did, to speak about the future of the country with awareness and sincere anguish and concern.

Christofias was an advocate of realism, but firmly grounded in principles. This is how he approached the solution of the Cyprus problem, which was the principal purpose of his life. It was clear in his mind that the only feasible solution, that would put an end to the occupation, reunite the land and the people, restore human rights and basic freedoms, was the solution of a bizonal, bicommunal federation. He defended this position with all his might, no matter how many fierce attacks he was subjected to and suffered. The value of this position, now that Turkey is officially promoting a two-state solution, is being revealed before us in all its magnitude.

What AKEL achieved under Christofias, what Christofias and the rest of the leadership built, has a double value for us today.

Of course, no one is happy about the position in which our party finds itself in today in the extremely difficult conditions that our country and society are going through.

Today, when Cyprus is facing dangers that perhaps may be prove to be fatal.

Today, when Cypriot society is questioning everything and everyone, when it is angry and disappointed.

The new leadership and I personally, as the new General Secretary, have before us a challenge that we must take on, that we must win. To pull forward again!

In these conditions, can we drive things forward again?

We can and must march forward!

With confidence and courage to act boldly and decisively without self-negation.

To feel the pulse of our era and do exactly what our party ideology and character urges us to do. The need, History.

A Party that has the goal and perspective of constructing a qualitatively more advanced society, that has an eye on the future but also thinks and acts in the present, right now.

Now when Cyprus needs the voice of prudence and patriotism, defending its very existence.

Now when society needs the voice of synthesis, the protection of the many, of progress, of the alternative proposal that is so much needed.

Now when the people are waiting for AKEL to turn the decision into a force. With faith in what we can achieve if we work together, united and committed to our goals, looking to the big picture, to the goal of changing our lives.

We shall win this challenge! With our ideology and history as our compass. With unity in our ranks and genuine comradeship. No more inward-looking approaches. With our eyes on society, with our hearts feeling the pain, sorrow and worries of the common people, we are reintroducing ourselves to the people!

Forward again we continue our march.

Again by marching forward we create our history!

We honor the memory of our Demetris!

All the best in our struggles!

Statements by General Secretary of the C.C. of AKEL S.Stefanou after the meeting with the Ambassador of Greece to Cyprus Theocharis Lalakos