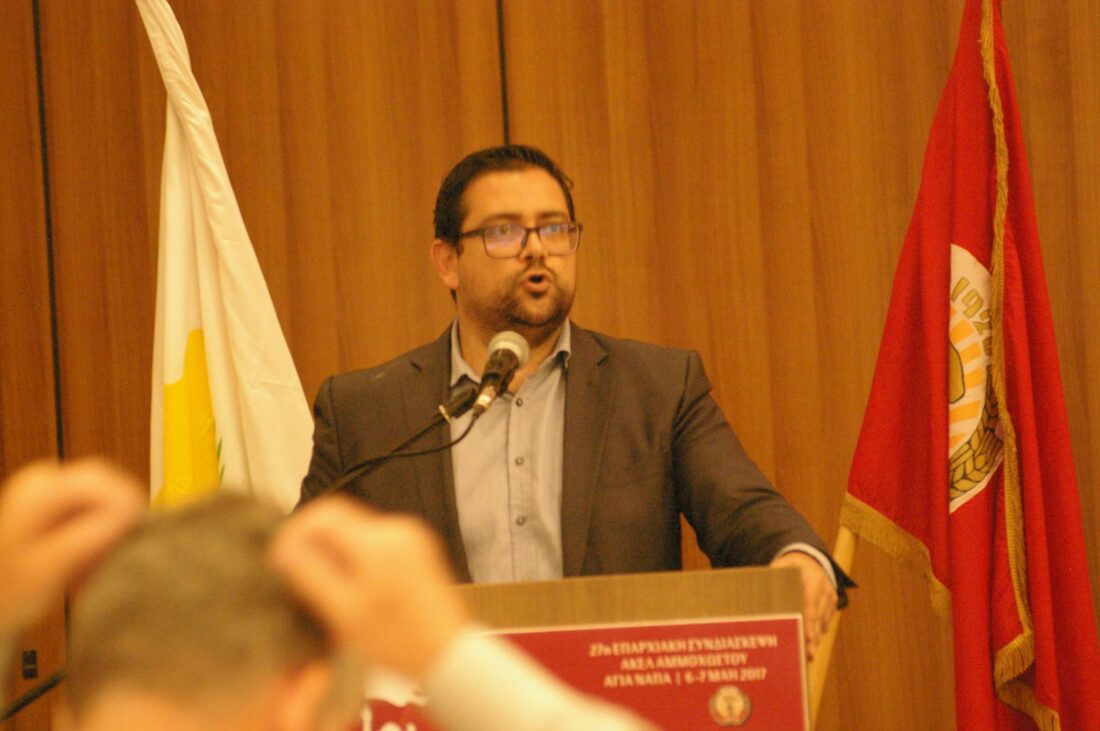 There is no other choice for the lawful inhabitants of Varosha other than A. Mavroyiannis in the presidential elections

HARAVGI: The AKEL Famagusta District Conference could perhaps not have come at a more critical time. Where do you think the forum will focus on most?

CZ: It is a fact that the 28th AKEL Famagusta District Conference is convening at a critical juncture – politically, socially and for the Party itself.

The Conference will deal with a wide range of issues. The Cyprus problem, the economy, labour issues, tourism and its prospects, especially for the free areas of Famagusta, unemployment, the problems of small and medium-sized enterprises, farmers, refugees, the enclaved people of the Karpasia peninsula [in the occupied areas] and many others.

At the same time, it is imperative that the Conference also deals with questions relating to the organisational structure of our District organisation. I am sure that issues such as the improvement of our organisational work, the actions of the Party locally and our political intervention in local communities will be among our Conference’s priorities, with the ultimate aim of making the Party respond more effectively to today’s conditions, so that our Organisation can fulfill both its organisational and political goals and objectives.

HARAVGI: And all this while we are well into the election campaign…

CZ: That’s true. After all, our principal political objective is to win the forthcoming presidential elections and to elect Andreas Mavroyiannis as President of the Republic. Inevitably, therefore, the discussions will focus on the presidential elections, our role in the campaign and how we shall contribute to the election of Andreas Mavroyiannis.

Some people are suggesting there aren’t any differences [between the candidates], given that Mr. Mavroyiannis was Nicos Anastasiades’ negotiator in handlings [on the Cyprus problem] that we all know where they ended up. Andreas Mavroyiannis was the negotiator for the Greek Cypriot side and his role was to promote and implement the policy decided by the given President. The negotiator has no political competence. Consequently, the responsibility for the handlings [on the Cyprus problem], which we all know where they led to, lies solely with Nicos Anastasiades himself, who, as President of the Republic, has the sole responsibility for the handlings made on the Cyprus problem.

HARAVGI: Could a lawful inhabitant of Varosha vote in these elections for a candidate from the government camp, given what has happened on the question of Varosha in particular?

CZ: The lawful inhabitants of Varosha know very well who is responsible for the negative developments in Varosha. I am not only talking about Turkey, of course, which bears the main responsibility, as it has evidently proceeded to take unilateral actions that are changing the status quo in Varosha with the opening of the enclosed area and everything that has subsequently followed.

The lawful inhabitants of Varosha know very well who, instead of taking measures to counter the Turkish threats, were mocking them and allowed things to develop in a way that unfortunately moves us further away from a solution of the Cyprus problem. Unfortunately, the government, with the handlings made and actions taken by the Anastasiades’ former Foreign Minister [Nikos Christodoulides], described the Turkish threats on Varosha as “communication games” and “pre-election tricks”.

As I said previously, Andreas Mavroyiannis, as the Greek Cypriot negotiator, bears no responsibility or has any competence in any of the handlings that had been made. The sole responsibility for the handlings made and ultimately for why we have arrived to the brink of partition, which will entail the permanent and irrevocable loss of both Varosha and the rest of our occupied territories, lies with the President of the Republic and the DISY government.

HARAVGI: If you are from Varosha, why should you vote for Mavroyiannis?

CZ: In my view, what is at stake in these elections is whether the government of Nicos Anastasiades and DISY will continue to govern the country pursuing the same policies, either with Averof Neofytou or Nicos Christodoulides, or whether the people will opt for a change in government and an end to these policies.

If you are from Varosha and want to save Varosha (and I don’t think there is a single refugee from Varosha who doesn’t want Varosha to be saved), then you only have one choice in the 2023 presidential election and that is Andreas Mavroyiannis. And this, for the simple reason that he is the only presidential candidate who puts among his priorities a proactive and energetic plan with actions/initiatives on the Cyprus problem with specific initiatives aimed at bringing all parties back to the negotiating table and resuming the talks from the point where they had remained at Crans-Montana.

This development is the only one that can save Varosha, since it will force Turkey to bring back the map it itself had submitted [at Crans Montana] and which provides for the return of Varosha under Greek Cypriot administration. At the same time, in the event of a resumption of talks, it will be very difficult for Turkey to continue unilaterally to proceed with the imposition of new fait accompli, either in Varosha or in the Exclusive Economic Zone of the Republic of Cyprus

HARAVGI: How much influence do you think the Cyprus problem will exercise in these presidential elections, given the unprecedented economic situation of ongoing price hikes and poverty?

CZ: It is a fact that the people, especially working people and the vulnerable groups of the population, are indeed in a difficult situation due to the escalating price hikes and declining living standards. The prices of essential goods are rising at an unprecedented rate, while at the same time incomes remain stagnant, with the result that their purchasing power is falling rapidly.

This situation, combined with the fact that the Cyprus problem has been in a prolonged deadlock for five years now, which is creating frustration and a lack of hope, de facto “forces” society to prioritise the day-to-day problems created by the punishing neoliberal policies being implemented by the European Union and blindly pursued by the Anastasiades-DISY government.

Despite the priorities society itself sets, however, as AKEL we believe that the Cyprus problem cannot but be one of our principal priorities and, of course, one of the priorities of the new government, which, together with the efforts to alleviate people’s daily problems, will immediately undertake initiatives that will also put our primary political problem back on track for its solution.

HARAVGI: What will be your key message to the AKEL Famagusta cadres this coming Sunday?

CZ: Our Party marks 96 years of life, struggles, assertions and sacrifices for the common people of labour. Guided by the ideals of socialism and its universal human values, our Party was born and is active with people and their real liberation and emancipation at its heart.

The long years of struggle and sacrifices of the Party bequeath to us a great task. Namely, to keep AKEL strong and united so that it can continue to play the role it has been called upon to serve. This will be the key message to the AKEL cadres at next Sunday’s Conference.

HARAVGI: Why does the free region of Famagusta need a change in government?

CZ: The government says that it has announced and is implementing projects worth millions. What the government doesn’t reflect the whole truth. Announcements have indeed been made, but the majority of them have not been fulfilled. A simple examination of the state budgets over recent years proves that, unfortunately, the free region of Famagusta was not among the Anastasiades government’s priorities.

It is a fact that President Anastasiades visited the free region of Famagusta twice, announcing projects worth several millions of euros in 2015 and 2017. During his visit in September 2017, he announced projects that had been already been announced in 2015 as well, and which for many different reasons were delayed or not included in the state budgets. So while many promises have been made several years ago, in practice, so far not everything promised by the government has been put into practice, with very few exceptions.

Unfortunately, projects for education, sports, health and rural development have been absent from the government’s developmental plan for the free region of Famagusta. This is yet another reason for a change in governance. The free region of Famagusta needs a government which, through its actions and not mere proclamations, will support the region and upgrade it to such a degree that it no longer will not lag behind all the other regions of Cyprus in developmental projects.

Wiretapping/surveillance: The evidence on Cyprus and the Greek government's tricks is overwhelming