Home  |  News   |  General Secretary of AKEL from London: AKEL, thinking and acting patriotically, will continue the struggle for a solution 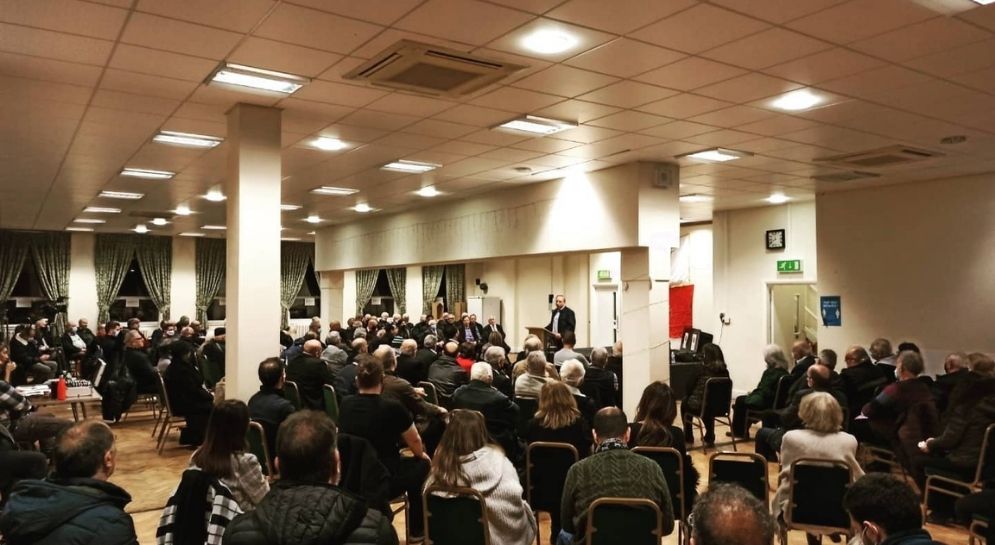 General Secretary of AKEL from London: AKEL, thinking and acting patriotically, will continue the struggle for a solution

Addressing a packed meeting of the Cypriot community in north London on Wednesday evening, the General Secretary of AKEL Stefanos Stefanou spoke of “inconsistency” in the commitment to the Crans Montana body of work agreed and of a “lack of credibility” in the eyes of the international community with regards the Cyprus problem, as far as the President of the Republic is concerned.

Stefanos Stefanou said that the international community perceives the developments on the Cyprus problem on the basis of what the UN Secretary General himself said in the Report he submitted in September 2017 in which he attributed responsibility for the failure of the negotiations at the Swiss resort “on the leaders of the two communities”.

He went on to point out that in recent years “Turkey has made the Cypriot Exclusive Economic Zone its playground” and violates international law “at little political cost”. According to S.Stefanou, the international community’s “disproportionately timid and lukewarm” reaction is not only due to the interests countries have with and in Turkey, but also due to the fact that “the Greek Cypriot side and the President of the Republic lack credibility” and that the international community “does not believe that the President of the Republic has a genuine political will to proceed with the solution of the Cyprus problem”.

On the same issue, the General Secretary of AKEL said that President Anastasiades is not doing anything to reverse this impression, but instead “the President proceeds to open up convergences that have been agreed, such as on political equality”. S.Stefanou questioned how the President can thus convince the international community of the Greek Cypriot side’s consistency.

Furthermore, the General Secretary of AKEL went on to say that his Party says that with an “advocate of partition” now in the leadership of the Turkish Cypriot community and with Turkey “instrumentalising” the ongoing deadlock by attempting to impose fait accompli on the ground, it is of great importance to safeguard what was achieved with the convergences recorded after painstaking negotiations.

“If we abandon this agreed body of work, we are doomed with a Turkish Cypriot leader like Ersin Tatar. (…) I say to the President of the Republic that we must be consistent and steadfast on the agreed basis of a solution, which is bizonal, bicommunal federation with political equality as outlined in the relevant UN resolutions. At a time when Turkey and the Turkish Cypriot leadership are now officially acting outside the agreed basis of the solution and are now officially promoting the two-state solution, it is of paramount importance that we are very clear about the basis of the solution.”

Concluding his reference to the Cyprus problem, S.Stefanou said that AKEL would continue to criticise the government, but not just for the sake of criticism. “AKEL, thinking and acting patriotically, will continue the struggle for a solution that will liberate and reunite our homeland and people.”

The General Secretary of AKEL then turned his attention to the perception that has been created in Europe about Cyprus due to the revelations on corruption. He said that from the contacts he had just concluded in Brussels he had concluded that “in Europe we are considered a paradise for money laundering, a country that sells European citizenships to fraudsters from different parts of the world”, stressing that this situation had been created “during the term of this government”.

“This is an example of the big problem that this Presidency has caused in the name of Cyprus,” Stefanou continued, accusing President Anastasiades of “not giving a damn” about the bad reputation that to Cyprus has gained with him playing a “pivotal role”.

The last part of the AKEL General Secretary’s speech concerned the “scenarios” about the presidential elections. After commenting that “there is one person who is already running fervently (for the presidential chair), namely the ruling DISY party President Averof Neophytou”, while he pointed out that as far as S.Stefanou is concerned “I am not counting on being a candidate.”

Stefanos Stefanou added that AKEL “has not discussed with anyone yet about the presidential elections” and that discussions and decisions would be made in the Party’s collective bodies. He noted that “of course” the party will “certainly” seek to discuss possible alliances, but as he stressed, alliances must have content, as well as programmatic and policy convergences.

His speech was delivered at the Cypriot Community Centre in North London, in the very heart of the Cypriot community, with several Turkish Cypriots present.

The event, at the suggestion of the General Secretary of AKEL himself, had a dual character, as it paid tribute to the memory of comrade Neophytos Nikolaou, a much-loved figure in the community who died of coronavirus earlier this year at the age of 74.

Paying tribute, S.Stefanou spoke of a man who “quietly was active everywhere” without seeking any recognition. He presented the deceased’s wife with the medal for 50 years of Party life and struggle “with much love, recognition and respect for the history that comrade Neophytos wrote in the spectrum of the left, in the Party and in the movement of Cypriots abroad”.

During his stay in London the General Secretary of AKEL will have meetings on Thursday with Labour Party Shadow Secretary of State for Peace Fabian Hamilton and subsequently with Europe Minister Wendy Morton. In the evening he will attend a dinner with British MP’s and Municipal Councilors from North London.

The contacts of the General Secretary of AKEL in Brussels concluded