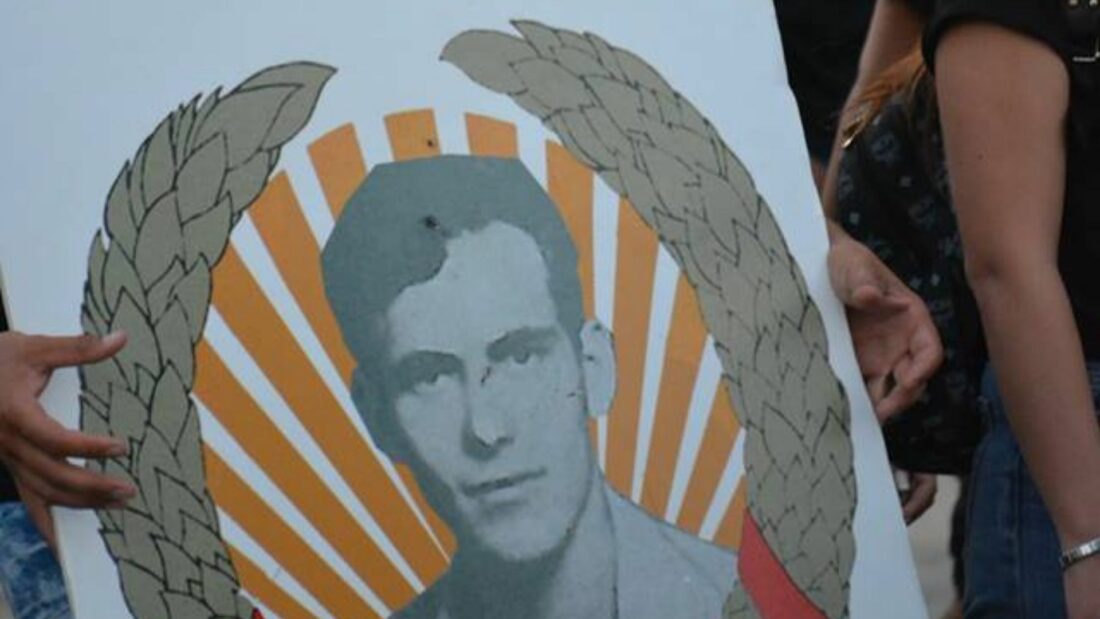 “The lights of the land rover were on, an armed man was sitting on the car front who ordered Misiaoulis to surrender the weapons he had. He didn’t reply. Then they opened fire…The one who was sitting on the car front fired a burst of gunfire over our heads. A flash of lightning went towards Misiaoulis. I saw him fall down. One of the gunmen ordered him to get up, but he wasn’t responding. He asked the other gunmen who opened fire. I did, replied one of them. He turned Misiaoulis over and saw that he had been hit in the abdomen, while blood had already formed a pool around him. They gave instructions to take him to the hospital. Before they left they forced another detainee to bend down and lick Misiaoulis’ blood…”

This is the testimony of Giorgos Kyriakos Pissis, a fellow prisoner of Kostas Misiaoulis, whose memory we honor today with this humble event.

“Long live Nikolaos Samson”, “Long live Enosis, union with Greece”. The coupists demanded that Kostas and his comrades shout these slogans with guns pointed at them, according to his wife Chrystalla.

Kostas Misiaoulis died on 22nd July in hospital. He had time to tell his wife that he was shot deliberately.

The murder of Kostas Misiaoulis is one of the few cases of the crimes committed during the coup that were brought to justice. Albeit belatedly, after much pressure from the family of Kostas Misiaouli and AKEL, the person who pulled the trigger was tried and convicted.

Four years after his conviction, he was pardoned by the then President of the Republic Spyros Kyprianou, which caused an uproar of reaction. AKEL’s demand for the decision to be revoked was never accepted. Just as the demand for the exemplary punishment of those responsible for the criminal coup that opened Cyprus’ backdoors to the Turkish invading army was never satisfied. Catharsis never came. On the contrary, even the 62 civil servants who were dismissed from the civil service were reinstated during the DISY government of Glafkos Clerides, retroactively receiving all the salaries and benefits they received as civil servants.

This is precisely why these events we organise are of immense value.

Because the history that was written in blood in the streets and squares of this country was never put into school textbooks/curricula, never referred to in the official narrative on Cyprus’ History.

Because if we don’t talk about it, no one else will.

Because if we do not keep the memory alive, amnesia and forgetfulness will prevail to erase all that happened and opened wounds in this land which have not yet closed.

Today, 47 years onwards, the Right and the far-right protest when we talk about murderers.

They avoid talking about traitors because then they would have to admit their betrayal and guilt for what they did.

They avoid talking openly about the murders because then they will have to acknowledge the political crimes that were committed in this country and that were certainly not committed by some invisible hand.

The murderers have a name: EOKA B.

Treason has an identity: NATO, the Greek Junta, Grivas.

We will insist on reminding them, not because we seek revenge, but to make history a consciousness, to vindicate the bloody sacrifices made for democracy.

Like thieves, they entered homes and arrested the people of the Left, supposedly searching for weapons. The truth is certainly different. Kostas Misiaoulis and his fellow prisoners, like hundreds of others throughout Cyprus, were arrested because they were members of AKEL, because they supported democracy and legality, the elected President of the Republic of Cyprus, Makarios. That was their crime. The dissolution of AKEL with the mass arrests of its members and cadres was the main objective of EOKA B.

All the testimonies, all the evidence we have before us highlights the following truth. The coup was the first part of the imperialist plan to overthrow Makarios and partition Cyprus. The coup was not some reckless action by a handful of ‘fools’, nor was it a “civil strife”, as the Right is fond of telling us every July. It was a premeditated crime planned by the Greek Junta and EOKA B. They, both Greeks and Cypriots, opened the door for the Turkish invading army to set foot in Cyprus.

The coup and the invasion are the two sides of the NATO plan, aiming at the partition of Cyprus. Since 1974 our country has been de facto partitioned and our people divided. So long as this situation is being perpetuated day by day, the plans of Cyprus’ enemies are slowly and steadily being implemented.

The only way to prevent these plans is to end the Turkish occupation.

Everyone is talking about a solution. The question is, what solution with what goal and what content are we pursuing?

AKEL seeks a solution that ends the Turkish occupation and reunites the land and the people within the framework of a bicommunal, bizonal federation with political equality as described in the relevant UN resolutions. This is the basis of a solution that has been agreed between the two sides since 1977 and has been confirmed by the Greek Cypriot side side many times since then, and has been endorsed in numerous UN resolutions.

The Turkish provocative actions and threats, the developments in Famagusta must at long last lead to a serious reflection by all of us and above all President Anastasiades, who is handling the Cyprus problem.

The Turkish stand is given, as well as its unacceptable and provocative behaviour. The question is what must we do and how can we confront Turkey’s new provocative actions, which are bringing us closer to the final partition of Cyprus.

We must at long last come out of the corner we are in and take real action. It’s all very well making representations to the United Nations and the international community. These efforts, which must be intensified, are necessary. But they are not enough to move the Greek Cypriot side forward. We need to move forward by taking concrete initiatives that will create momentum for the resumption of the negotiations.

Last December, AKEL submitted to Mr. Anastasiades a concrete proposal on what needs to be done to resume substantive talks. On how and from what point to resume negotiations. On how we can turn natural gas into a momentum-building factor for the resumption of negotiations.  And if this proposal does not yield results, at least our side should not be held responsible for any deadlock. We are certainly not claiming that our proposal will necessarily deliver results. But we believe it is capable of restoring the Greek Cypriot side’s credibility, effectively countering Turkey’s claims and putting pressure on the occupying power. All the more so as it responds to what the UN Secretary General himself has been calling for in his Reports, including his latest one on the renewal of the mandate of the United Nations Peacekeeping Force in Cyprus (UNFICYP).

We must draw conclusions from History. In 1974 AKEL issued warnings but it was attacked, ridiculed, and put at gun point as soon as they took up arms. But unfortunately, a thousand times unfortunately, AKEL’s warnings came true.

Today AKEL insists on warning of the suffering that will befall the Cypriot people if this situation continues. We are on the brink of final partition, but nothing is over yet.  With initiatives, realism and commitment to principles, we can achieve the resumption of talks aimed at a solution of a bizonal bicommunal federation that will liberate and reunite our country and people, restore human rights and basic freedoms to our land and make our people the true masters of our Cyprus.

There is no better honor to the memory of all those who rushed to resist the coup, all those who ran to defend Cyprus against the might of the Turkish arm than peace and reunification.

Only if the crime that took away their lives is not completed will their sacrifices attain a real meaning. If the flower of peace and reunification grows on their blood that watered the Cypriot land.

Honor and Glory to Kostas Misiaoulis!

Speech by Vera Polycarpou, Head of International Relations Bureau of AKEL, Member of the Central Committee at the solidarity event outside the Cuban Embassy