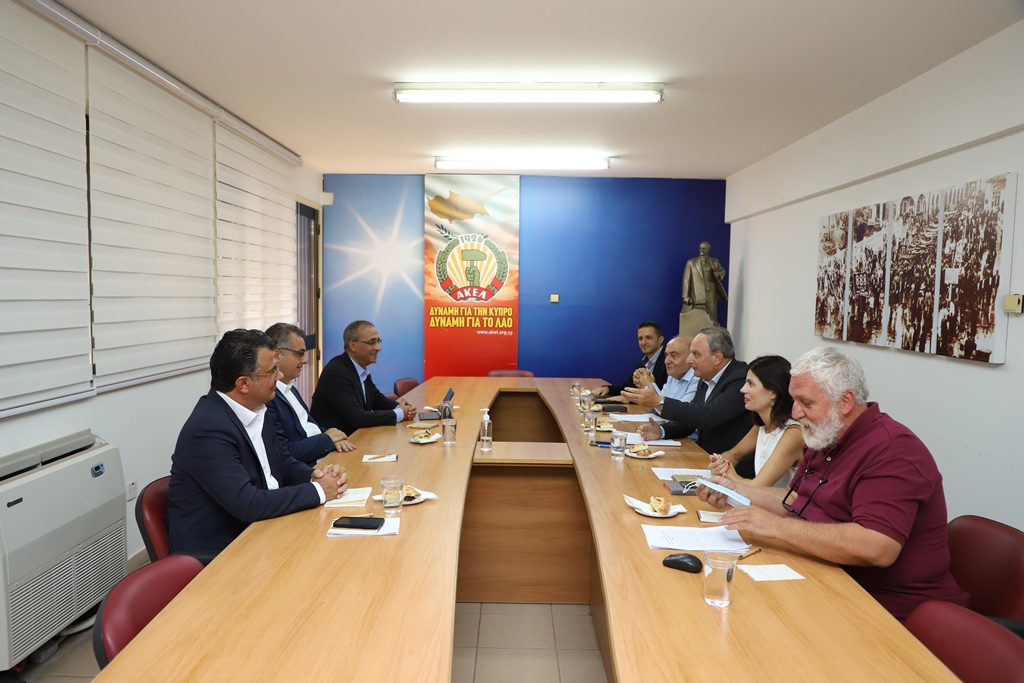 “Today we had the pleasure and honor of receiving at our Party’s central offices the delegation of CTP, following a similar meeting we had at their offices. We continued the discussion on issues of mutual concern, such as of course the Cyprus problem.

AKEL and CTP are two parties with historic and long-standing relations, in the common effort to achieve a solution to the Cyprus problem, to reunify our country and for Greek Cypriots and Turkish Cypriots together in a common state to co-manage their present and future.

In order to promote specific initiatives and actions by our parties in the field of rapprochement and issues related to day-to-day life, as well as issues related to the need to promote the solution [of the Cyprus problem], we have set up a working group which will give a specific content to these efforts. We shall implement whatever results stem from this work in life and in practice.

We exchanged views on the deadlock and stalemate surrounding the Cyprus problem and the need to create momentum for the resumption of the negotiations. The result of this discussion is contained in the Joint Declaration to which the two delegations have agreed”.

The General Secretary of AKEL expressed his pleasure at the presence of the CTP delegation at the Party’s offices and at the dialogue between the delegations of the two parties.

Moreover, in response to a question regarding the Confidence Building Measures (CBM’s) being discussed by the two parties, Stefanos Stefanou replied as follows:

“The first thing the two parties agree on is to push forward the effort for a resumption of the negotiations, to put an end to the stagnation and deadlock and to create a dynamic for a solution, an effort for which a positive agenda is needed.

It is known that on the basis of this approach, AKEL had submitted a specific proposal to President Anastasiades some two years ago on how the energy sector could be made use of so as to generate incentives and create levers both towards the Turkish Cypriot community and Turkey to create momentum for the resumption of negotiations. As you have heard, CTP has specific thoughts and proposals too. We said that we would discuss in the spirit of how to formulate possible concrete joint proposals, which we will submit both to society and, more importantly, to the leaders of the two communities because if these issues are not discussed by the leaders of the two communities and are not raised in the talks, then they will be of no practical value.

There is a common understanding here on various issues, while on others we may have different approaches. However, we are parties with a historic relations. We can engage in discussions to find common ground in an attempt to help push the whole procedure forward.

That is at the level, if I may say so, of high politics. The positive agenda also contains confidence-building measures, low-level political issues, which are of great interest to both communities, the question of communication between the two communities, cultivating confidence between Greek Cypriots and Turkish Cypriots – what AKEL calls rapprochement. Here too, a great deal can be done and as we said earlier on, we will also discuss this issue in the working group [we have established] in an effort to formulate joint initiatives so that, together, we can move forward in a practical and concrete way.”