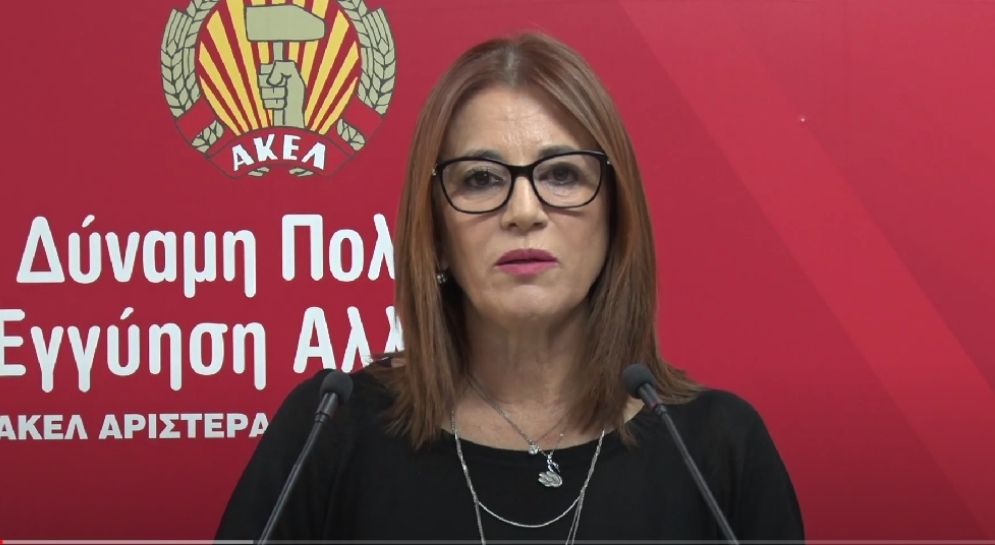 The absence of social welfare has brought tragic results

Head of the Social Policy Bureau of the C.C. of AKEL, Evanthia Savva, analyses the problems and objectives of the newly formed Bureau of the Party in an interview with “Haravgi” newspaper, Sunday 16 January 2022.

A state without a meaningful social welfare policy, with ineffective legislation and procedures, which leaves thousands of people exposed to poverty. This is the situation described to “Haravgi” by the Head of the Social Policy Bureau of the Central Committee of AKEL, Evanthia Savva, who, drawing on her experience on social policy issues as a former AKEL MP, has taken been assigned the responsibility to head perhaps the most sensitive policy issue, coordinating wide-ranging tasks of recording the current situation, coordinating actions and elaborating positions to be expressed at a political level.

The Social Policy Bureau of the C.C. of AKEL comprises four Offices: Housing Policy, Disability, Refugees and Family Policy, which have begun working on the elaboration of positions/proposals in the specific fields of activity. This procedure will be completed by the end of January with the preparation of organisational plans.

“We must ask ourselves whether there is indeed a welfare state, taking into account the conditions that have developed in the pandemic period. The State’s social policy is in effect limited to the Minimum Guaranteed Income (MGI), while Social Welfare Services are not operating efficiently. Through our experience, it has been proven that this system does not work”, said Evanthia Savva, speaking about the means which the government considers to essentially cover social welfare needs.

The reality, continued the Head of the Social Policy Bureau of AKEL, is different as the current situation and conditions are completely different to those that existed in 2014, when the Minimum Guaranteed Income was established. “Today, the 480 euros provided cannot cover even the minimum of needs,” E.Savva noted, adding that the administrative difficulties in processing applications for securing the MGI with the huge delays observed must be taken into account.

A characteristic example she cited was the paper boxes that were placed outside Social Insurance offices during the quarantine period in which people had to place their applications. Through this procedure, many documents were lost with applications that had been submitted, with the result that claimants had to resubmit them, with all the consequences in terms of both time and cost. “We need to look in general at the procedures and delays in processing applications for benefits. Whatever the citizen is getting, he/she is receiving it with huge delays. How will someone live who, for example, depends on sickness benefit but receives it only after a few months?” stated Evanthia Savva.

“The gathering together of all vulnerable groups (refugees, migrants, people with disabilities and so on) into the MGI is not only erroneous, but also a failed practice, as the experience of the implementation of the MGI itself has shown so far, given that it takes from the poor to give to the poorest. If we add to this the administrative difficulties in its implementation, which so far do not seem to have been overcome, the MGI does not seem to have fulfilled its purpose. Unless, of course, its purpose was to reduce social benefits and cause inconvenience to thousands of our fellow citizens”, Evanthia Savva stressed, also pointing out the need to review the basket of essential needs and to adjust all benefits to meet today’s conditions.

“The dismantling of the welfare state over the last 8 years, the distortions in the MGI, the failure to restructure the pension system in a more equitable and fair way, the lack of child protection infrastructures, the absence of structures for people with disabilities over 21 years old, the non-existence of an effective housing policy is leading a large section of the population and vulnerable groups to despair,” she added, pointing out the need to modernise key legislation such as the Children’s Act, the Adoption Act, the Act on the Operation of Homes for the Elderly and Disabled, which are all outdated.

“Whose responsibility is it that Social Welfare Services cannot provide real support to those who need it?

Who is responsible for the gathering together of elderly people, underage children and unaccompanied migrants in old people’s homes?

Who is responsible for the accommodation of the mentally ill and people with disabilities in general in old people’s homes?

Is this the concept of social protection that the government serves? Is this how we provide support to the vulnerable groups and the weak in Cyprus today?” asked Evanthia Savva.

A serious deficiency, as noted by E. Savva, is the inadequacy of state-run facilities for persons with disabilities, especially for those over 21 years of age who are essentially dependent on private initiatives for institutional accommodation. “Modern legislation based on the United Nations Convention on the Rights of Persons with Disabilities is needed,” the former AKEL MP commented.

She also referred to the major gaps in the policy with regards the refugees and displaced persons of the 1974 war/occupation such as inadequate infrastructures (apartment blocks with elderly people without lifts), ageing refugee settlements and numerous other refugee problems.

Referring to the housing problem, E.Savva stressed that access to decent housing is becoming one of the biggest social problems in Cyprus. Never before, she noted, since 1974, has Cyprus experienced the housing problem on such a scale as it does today.

Furthermore, she cited data released by the Cyprus Statistical Service which reveals a continuous increase in the price of houses since 2015, making it even more difficult to acquire a home, especially young couples. This increase has multiplied over the last year.

Explaining AKEL’s position that the government’s housing policy does not meet society’s real needs, she gave the example of housing projects concerning marginal and remote areas.

These projects, she said, do not correspond to young couple’s current salaries and the enormous difficulty they face in obtaining loans from banks. “To some extent these schemes are nothing but a meaningless gift given that, in practice, many couples are not in a position to make use of them. We have reached the point where couples who cannot afford to maintain their own home because of rent and other reasons are going back to live with their parents. The government must elaborate a comprehensive and modern housing policy, which does not exist today,” said the Head of the Social Policy Bureau of the C.C. of AKEL.