Home  |  News   |  Speech by the General Secretary of AKEL S.Stefanou, at the memorial service of Kyriakos and Sotiris Papalazarou 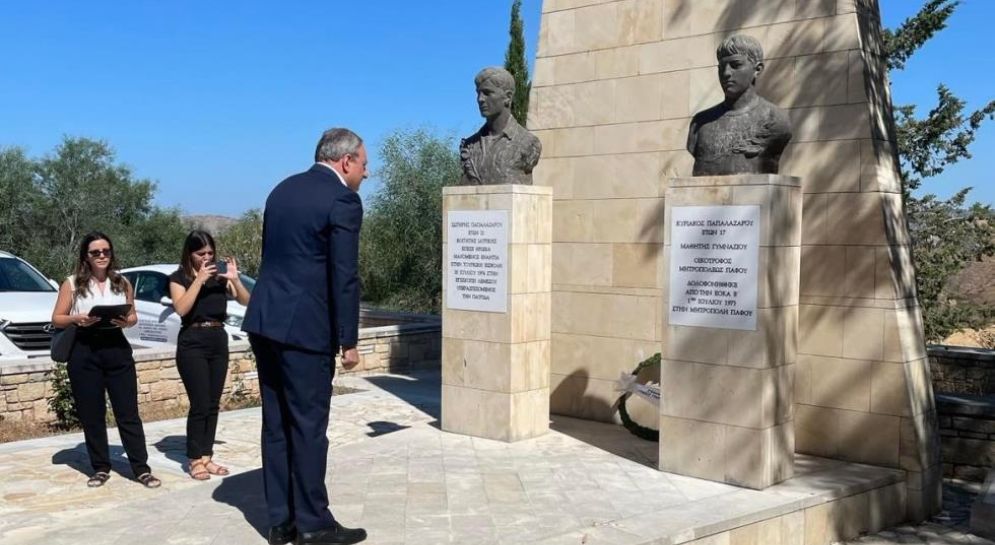 Speech by the General Secretary of AKEL S.Stefanou, at the memorial service of Kyriakos and Sotiris Papalazarou

Heroic dead of the Resistance, Democracy and Freedom, we are here once again to honor your memory. Unfortunately, however, we have not brought good news about the vindication of your sacrifice.

Our homeland remains enslaved, the occupation is taking root and being consolidated and creating new fait accompli. The ideas that infused our people with the poison of nationalism and chauvinism have not been eradicated. The modern history of our martyred island and the sacrifice of its heroes are hidden deeper into drawers every year. You see, now the government ruling forces are denigrating the memorial services of the heroes of the resistance. They want us to build memorials in honor of those who clothed Cyprus in black.

They are trying to make us forget.

Or even worse, they are seeking to rewrite history to suit their own interests, to suit the betrayal that was committed.

They want us to talk about a coup – but not about coupists.

They want us to remember the Greek Junta – but not EOKA B, Grivas and the other members of the gang, who on 15 July 1974, laid the solid foundation for selling off our country.

They want us to refer to the Turkish invasion – but not to those who opened the back doors to Turkey’s invading army.

They won’t succeed in what they’re attempting, however. We will continue to prevent it. We who carry a heavy legacy on our shoulders left to us by the struggle and sacrifice of dozens of young people who were murdered by EOKA B and who resisted the coup. The hundreds who sacrificed their lives fighting Turkey’s invading army.

We do not forget! We cannot forget because we constantly think of black-clad parents like Papalazaros and Agathoniki who gave two children as a sacrifice for this Homeland.

Kyriakos Papalazarou, was the third of the nine children of the priest Papalazarou and Agathoniki. Coming from a family with a strong presence within the ranks of AKEL, Kyriakos, like the other children bearing the surname Papalazaros, was targeted by the extreme right-wing. When Kyriakos was a boarder in the Paphos Metropolis, the plans of the three pro-Greek junta Bishops for an ecclesiastical coup against Makarios were underway. Papalazaros was one of the clergymen who not only resisted these plans, but also organised the resistance. To get revenge on him, EOKA B – who had him in their sights anyway – decided to assassinate his son Kyriakos while he was in the Paphos Metropolis. A member of EOKA B, a guard at the Metropolis, murdered Kyriakos. With full consciousness and coolness, the murderer put the gun in the 17-year-old boy’s mouth and pulled the trigger. It was the early morning of July 1, 1973.

The killer was never convicted of his horrific crime no matter how much Kyriakos’ family tried. Five police officers were witnesses at the trial, but none testified against the killer. The killer remained in his job until retirement, while the case was closed. The file disappeared, as officials had informed Papalazaros, nowhere to be seen! A conspiracy of silence and impunity encouraged the audacity of the perpetrators to add insult to injury.  When they informed Papalazaros that nothing could be done and offered him compensation, the courageous Papalazaros replied defiantly: “I don’t want your money…”

As if Kyriakos’ sacrifice was not enough, a second blow was dealt to the Papalazaros family. Sotiris Papalazarou, the eldest son of the family, fell during the invasion defending the homeland.  An excellent student, with distinctions in sports, he joined the youth organisation of AKEL, EDON, from his youth and was inspired by the ideals of the Left. He even put his thoughts on paper in poems dedicated to peace. Poems collected by EDON in a collection, together with short stories, which the Youth Organization has recently reissued.

Although Sotiris was on a short holiday in Cyprus from Rostov in the Soviet Union where he was studying medicine, when the coup occurred he rushed to the Ayi Yianni Limassol Police Station to help in its defence. Even after the coup prevailed, he didn’t surrender his weapon and declared himself ready to fight, saying that “There can be no compromise with fascism. Either you fight it valiantly, or you become its slave”. This was Sotiris’ ethos and principles, like many other fighters from the ranks of the People’s Movement of the Left.

At the outbreak of the invasion Sotiris without any hesitation, joined the National Guard. He was sent to Episkopi, where fighting with heroism and self-sacrifice he fell fighting.

We are here today, 48 years later, fully aware that the history of this country would have been different had nationalism, fanaticism and intolerance not armed the hands of a shameful minority against our people. Had the Right “national-minded” forces allowed our people to live in friendship and as masters of their own land.

It is true that US-NATO imperialism wanted Cyprus under its control. It is equally true however – and this is probably more painful – that the foreign powers could not have implemented their plans had mistakes were avoided and had there hadn’t been any Cypriots willing to serve their plans. Cypriots who did not hesitate to take up arms and turn them against our people, who did not hesitate to commit political murders, mainly people of the Left with the blood shed by its members.

The memory of Kyriakos’ assassination fills us with anger and demands that we should not forget. We must remember the crime committed and turn it into a lesson for the young generations who must continue to struggle for justice and democracy.

Sotiris’ sacrifice commands us to remember, to continue to fight for the liberation and reunification of our country and people, Greek Cypriots and Turkish Cypriots alike.

The life and example of Papalazaros and Agathoniki, the two tragic parents who are not among us today, gives us the strength to continue until the final vindication. Because the two of them never compromised with injustice, fascism and intimidation and remained stalwart pioneers at the forefront of the struggle for the vindication of our people, whom their two children served shedding their own blood.

These are times of unprecedented difficulty for our country. Day by day, the hope for a solution to the Cyprus problem is receding.

On the one hand, Turkey is continuing its provocative stance and with its repeated illegal actions is reinforcing the partitionist fait accompli on the ground and imposing new ones. On the other hand, the international community not only avoids denouncing the Turkish actions in Varosha and the Turkish-Tatar demand for “sovereign equality”, but it no longer refers to the agreed basis for a solution – namely Bizonal, Bicommunal Federation on the basis of political equality. The international community no longer refers to the need to continue negotiations from the point where they were interrupted at Crans Montana.

It is clear that Turkey is instrumentalising the prolonged stalemate on the Cyprus problem to reinforce the division. At the same time, it is increasing its pressure on the Turkish Cypriots. In the face of this tragic situation, there is no room for any complacency and passivity. Already, the erroneous handling of the government ruling forces and their passive contemplation of developments are costing us dearly. It is no coincidence that while Turkey has escalated its aggression and intransigence, the international community holds the Greek Cypriot side jointly responsible for the stalemate. The shoddy and contradictory handlings of the Anastasiades- DISY government have contributed to the Greek Cypriot side and the Republic of Cyprus in general losing their credibility and on responsibilities being assigned on them.

It is imperative to take concrete initiatives with feasible proposals in an effort to break the deadlock and create momentum for resuming the negotiations from the point where they were interrupted on the basis of the Guterres Framework, while preserving the convergences agreed. That’s the way to prevent Turkey’s attempt to perpetuate the partitionist fait accompli, and this is where we must focus our attention.

AKEL, with consistency, responsibility and a high sense of responsibility towards our people, will continue to fight for a solution of the Cyprus problem. Only with this solution can we secure the future of our country.

For us, the memory of the sacrifice of Kyriakos and Sotiris Papalazaros, but also of so many other heroes, will continue to be a tireless fighter for the liberation, the reunification of our country and people, for the strengthening of permanent peace and security in our country.

The memory of Kyriakos and Sotiris will live on forever!

Honor and glory to our heroes!

In the name of our myriad dead - Article by Eleni Mavrou, AKEL Political Bureau member