Home  |  News   |  AKEL General Secretary Stefanos Stefanou: “The stronger AKEL is, the stronger the hope for the country” 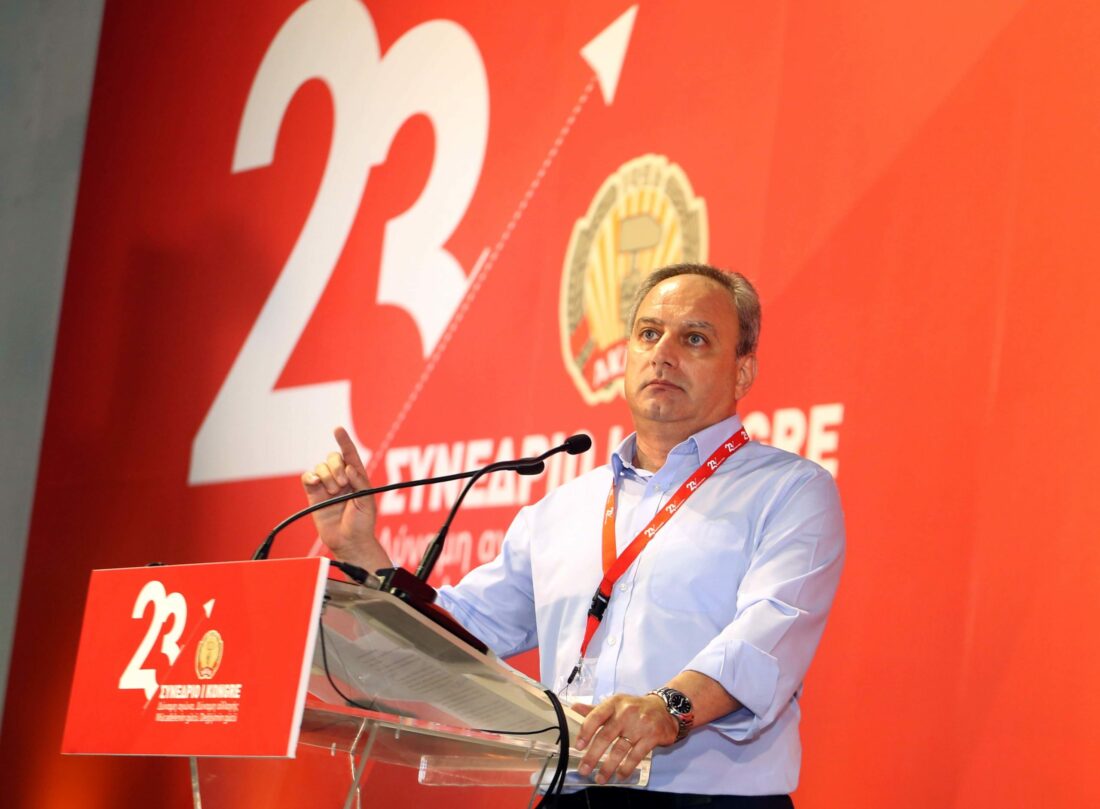 AKEL General Secretary Stefanos Stefanou: “The stronger AKEL is, the stronger the hope for the country”

Speaking from the podium of the 23rd Congress, the newly elected General Secretary of AKEL Stefanos Stefanou expressed his thanks to the Party’s Central Committee, which, he said, had put him “first among equals”.

“I feel awe, because in very difficult conditions for Cyprus, the Party and for the whole people, I am called upon – together with the rest of the Party leadership – to meet expectations, take on challenges and all that is at stake,” he noted.

Stefanos Stefanou added that for him “it is a great honor, but an even greater responsibility”, pointing out that the new Central Committee is fully aware of the criticality of the times and the burden of responsibility, which is enormous.

He added that “it is not only the challenges and problems facing the country, workers, society and the people, but the burden is great, because we know that the stronger AKEL is, the stronger the hope for our country.”

The General Secretary of AKEL assured from the podium of the 23rd AKEL Congress that the new leadership will give every ounce of its strength to live up to these expectations.

“He has never hesitated to take on responsibilities even those that were not his own,” S. Stefanou stated referring to A. Kyprianou.

Addressing the outgoing General Secretary of the Party’s Central Committee, Andros Kyprianou, Stefanou expressed “a big thank you from everyone for what Andros Kyprianou has offered to the Party and the Left movement”.

In relation to the outgoing members of the Secretariat and Political Bureau Pambis Kyritsis, Christos Alekou and Melia Avraam who were not candidates for the new Central Committee, Stefanou said: “We know that they are not going to retire from the struggles of the Movement of the Left and they are not going to be “discharged”, because for all of them and for all of us and for thousands of others, who are organised within the ranks of the left, through the Movement of the Left, they give meaning to their lives and to our lives through their struggles and contribution.”

Referring to the recent parliamentary elections, the new General Secretary of AKEL said that “they sent out a clear message”, noting that “if we really want to change the reality in which we live and for which we are not at all satisfied with, not only ourselves but also the overwhelming majority of our people, we must first of all transform ourselves”.

“Not to revoke and undo our ideological and political identity, but to listen to the demands and challenges of the new age, investing in what we are as a Party for almost a century,” he said.

He went on to say that “we have an obligation to work in such a way so that we can become again what our history, which our struggles have created, demands us to be, to stand tall and powerful.”

“To become once again protagonists in the fields that shape progress”

S.Stefanou also said that “in this effort, it is easy to get caught up in ideological concepts and to regurgitate and engage in sloganeering, but the difficult thing is to articulate a new discourse that draws on our Party’s rich experience.”

“The easy thing,” he added, “is to close ourselves in our own shells and not care what society says and feels. The easy thing is for us to say our own thing and whoever follows us. The hard thing is to open up ourselves back to society in the way we have done every time. To become protagonists again in the fields that shape progress and to let AKEL continue to be the refuge of every worker, every toiler and wage earner, every person belonging to the popular strata, every person who is worried about how to make ends meet, how to get through the day, the week or the month”.

Stefanos Stefanou stated that “this task is difficult, but AKEL is for difficult times and tasks”, because, he added, “AKEL has always made things difficult for itself, fully aware that every progressive move forward, every positive development is born through difficulties”.

In relation to the solution of the Cyprus problem, Stefanou said that the 23rd Congress of the Party has confirmed yet another truth, that Cyprus needs a strong AKEL, because Cyprus is at a very difficult crossroads.

As he said, “for the first time we are so close to the final partition of Cyprus”, adding that AKEL has been fighting for Cyprus all its life. It has been issuing warnings, because it knows that partition is the beginning of new adventures for our country and people.

“And we cannot afford any new adventures. It is no coincidence that the people are a key point of reference in our policies, in our interventions, in our actions, because we want to protect the people, the workers, society from those policies that want to pressure them and drive them to the margins,” he said.

Furthermore, S.Stefanou said that it had been confirmed at the Congress that “AKEL, with its specific positions, with its clear positions that have never changed, will continue to work to prevent partition in order to liberate and reunite the country and the people through a solution of a bizonal, bicommunal federation”.

“We have never had any doubt whatsoever that there are not many options before us. Those forces who brought Turkey to Cyprus have left us as a result of the occupation with only one option: the solution of bizonal, bicommunal federation. Namely, either a solution of a bizonal, bicommunal federation or partition. There is no room for any half-truths and hidden words. The present and the future of our country cannot withstand and endure such attitudes. We shall continue to move forward to save Cyprus,” he said.

Fires – “Our hearts are burning on the blazing fire fronts”

Referring to the devastating fire that has struck communities in Larnaca and Limassol, Stefanos Stefanou said that “we may have had the deliberations of our Congress, which lasted for three days, our minds may be on this dialogue and the decisions we took, but at the same time our hearts are burning on the front of the fires.”

“We had said that as soon as we conclude the Congress, a delegation of the new Party leadership will go to the site of the fires to convey the message that AKEL will be at the disposal of the state and the state services, with all its resources to address this tragedy,” he said.

“On the side of Stefanos, we will wage the battle,” said G. AKEL.

Speaking from the podium of the Congress, Central Committee member Giorgos Loucaides said: “We have both addressed the Central Committee. I have said to the C.C. too and I will say it here as well that whatever the result (for the election of the new General Secretary) is, the feeling will be good. That’s what I said because I felt security in the event Stefanos Stefanou was elected General Secertary of AKEL”.

“We will all together – myself included – the first of all and alongside Stefanos, wage the battle to take our Party back to where we left it,” he added.

The new Central Committee of AKEL has been elected

The solution of education issues has been put off indefinitely